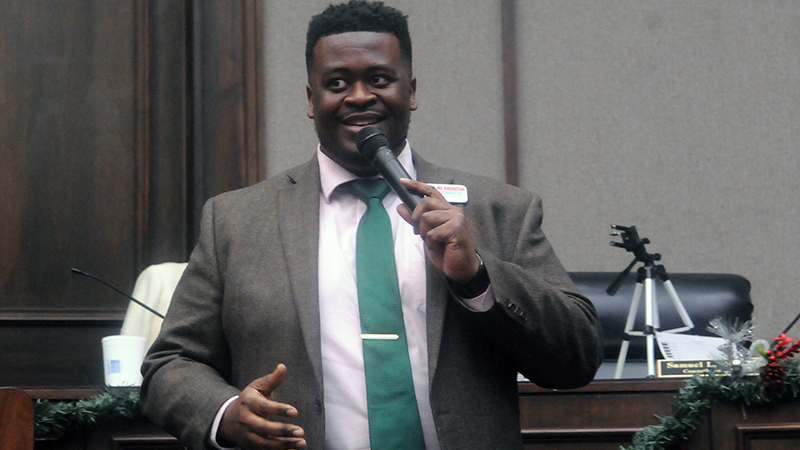 In a marathon session Tuesday night, which began with a 3 p.m. work session and moved directly to a 5 p.m. meeting, the Selma City Council did more than approve Kenta Fulford as Chief of the Selma Police Department (SPD) – the council approved a one-time raise for all city employees and took action to move forward on construction of the city’s splash pad.

Selma City Council President Corey Bowie brought forth the idea of a one-time raise, which will cost the city just over $120,000, and called the move “imperative.”

“I think it’s well worth it for our employees,” Bowie said, adding that city employees have “been through hell this year” and deserve “a little hope.”

Though he said he had no problem with a one-time raise for city workers, Selma City Councilman John Leashore nonetheless objected to the effort, saying that such a raise should be included in the budget so that the council could be sure that the money was available for the raise.

Leashore blasted the council for failing to approve a new budget, but Selma City Treasurer Ronita Wade stated that the city has approved a budget – it is utilizing an earlier budget and amending it to include needs identified by department heads and the council – but Leashore persisted, saying that the council is in fact operating off of a “continuing resolution” rather than a properly-approved budget.

In the end, the council approved the raise, which varies from employee to employee based on the length of employment – employees with less than one year are afforded a $200 raise while employees with 10 years or more were given a $1,600 raise – with only Leashore voting against the measure.

The council took up the issue of the splash pad, a project that began in 2016 and sparked wide disagreement across the council, during the work session, stating that the city must move forward or risk jeopardizing future grants.

The council approved moving forward with the project, which will be constructed near the downtown playground and eventually include seating, shade and fencing.

The city also discussed downtown wireless internet service, the funding for which was provided by the Alabama Department of Economic and Community Affairs (ADECA), the work for which was done by Black Belt Technologies, and lamented the shoddiness of the service.

The city is due to pay its $75,000 portion for the project, but council members wondered if representatives from Black Belt Technologies could be invited to demonstrate how the technology is meant to function as, currently, downtown visitors are effectively disconnected from the web.

“If what we’ve got is what this is supposed to be, we didn’t really spend our money very smart,” said Selma City Councilman Carl Bowline in regard to downtown wireless  service.

Leashore stated that he believed that Black Belt Technologies could allay the council’s concerns regarding the wireless internet service.

The council elected to hold off on approving the payment until the next meeting in January.

Elsewhere in the meeting, the council heard from Collins Pettaway III, a Selma native and representative with the U.S. Census Bureau, about the importance of the 2020 Census, which will begin in March.

According to Pettaway, the importance of the upcoming tally can be summed up in two words: money and power.

“That’s honestly the main two reasons why the census is important,” Pettaway said. “There are other reasons, but those are the two big ones.”

As far as power is concerned, census data determines the number of representatives each state will receive in Congress – rumors have already circulated that Alabama could lose a congressional seat, so participation in next year’s census is one way to ensure that the state maintains its level of representation in Washington.

When it comes to money, Pettaway noted that the federal government allots some $675 billion annually to nonprofit organizations, schools and other entities based on census data.

Pettaway noted that in 2010, the last time the census was taken, Selma had a 71 percent participation rate – he encouraged those in attendance to imagine the difference that could be made by getting that number up.

“The goal of the census is to count every person once and only one and in their right place,” Pettaway said. “I want Selma to create a huge, huge showing.”

“Our district needs this,” Perkins said. “We’re going to do outreach to our parents to make them stronger parents, which makes stronger students.”

Leashore, a continual advocate for local education, praised the idea and encouraged council members to get on board.

“This is a real opportunity to enforce the support that our children need,” Leashore said.

In its consent agenda, the council approved the following measures:

• A contract with Prattville-based Azimuth, a grant consulting firm;

• A $1,350 contract with the Dallas County Umpire’s Association;

• A $24,000 contract with Copeland Welding Company for the installation of 64 storm drain covers in Ward 3 – $22,000 will come from Ward 3 Capital Improvement Funds and $2,000 will comes from Selma City Councilwoman Miah Jackson’s discretionary funds.