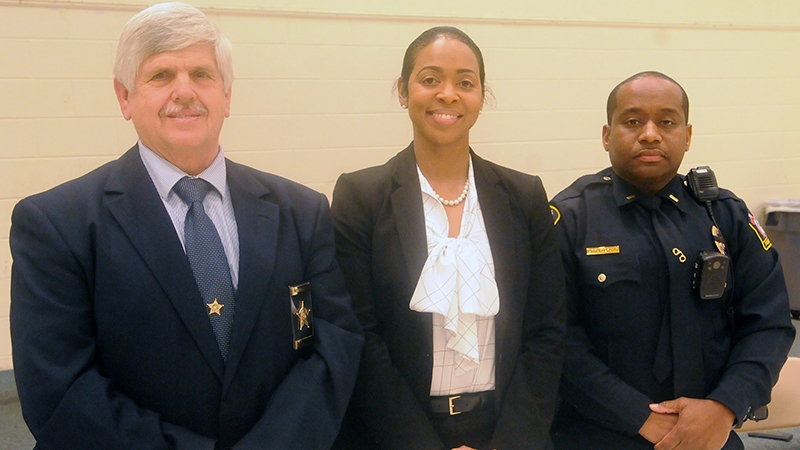 On Tuesday afternoon, citizens gathered in the Selma Convention Center to shake hands and talk with the three finalists vying to lead the Selma Police Department (SPD).

The Selma City Council is slated to announced its pick for chief during a meeting next week – the new chief will take office at the beginning of next year, replacing current SPD Interim Chief Johnny King, who took the post following the departure of former SPD Interim Chief Robert Green last month.

Selma City Councilwoman Angela Benjamin welcomed those in attendance before each of the finalists made a few remarks on the microphone.

Fulford was the first to speak and leaned on his 17 years of experience with the SPD.

Fulford noted that one of the key problems the department currently faces is the continual loss of senior officers and the inability to replace them with skilled newcomers.

“We need to recruit officers,” Fulford said. “We’re way below the number we need to have in a city this size.”

Fulford also noted that many officers leave the force after going through the academy and working a brief stint locally, adding to the need for concerted retention efforts.

Fulford also vocalized his support for a bike patrol that would bolster community policing efforts.

Harden spoke next and, after giving the audience a crash course in his roughly 40-year law enforcement career, focused on the need to tackle youth crime in the city.

“We have a big problem with youth crime,” Harden said. “So far this year, [working as an investigator with the Dallas County Sheriff’s Office], I have arrested three 17 year olds charged with capital murder. That’s too many.”

Harden also stated that, if selected to serve as chief, he would have an “open-door policy” and be willing to hand out his cellphone number so citizens could contact him anytime.

Stewart was the last to address the crowd and focused on the need to build trust for law enforcement within the community, saying that officers have to get back to “policing fundamentals” and rekindle their passion for policing.

In order to do that, recruitment efforts have to be launched so officers can avoid being overwhelmed and competitive pay has to be offered to keep those officers on the local force.

Stewart said there also needs to be a two-way street in terms of respect.

“I can arrest you and still respect you,” Stewart said. “We’re not just here to enforce the law, we’re also here to defend your rights. We need you just as much as you need us to protect and serve.”

Stewart noted that she loves her current job, which allows her to guide people through the parole process and regain their rights, but looks forward to the possibility of serving in Selma.

“I realize that if I’m called to serve as the chief of police…it may get me out of my comfort zone,” Stewart said. “I believe Selma is going to move forward, whether it’s me or one of these other candidates, but I would like to be a part of that process.”

SCS names Teachers of the Year