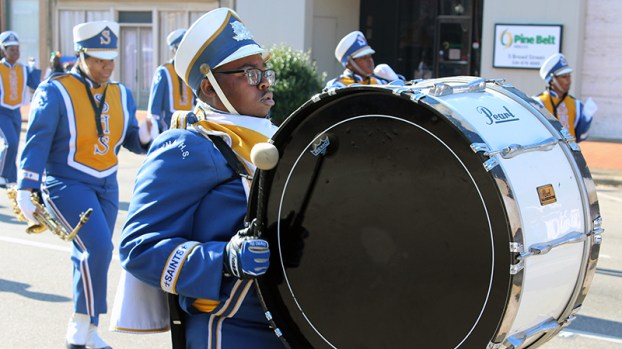 The Christmas season unofficially began in the Queen City this weekend with the City of Selma’s annual Christmas Parade.

The parade, which began at the corner of Broad Street and Water Avenue, was a display of nearly everything the Selma-Dallas County community has to offer, including first responders like the Selma Police Department (SPD) and Selma Fire Department (SFD), elected officials like Selma City Councilwoman Miah Jackson and Dallas County Commissioners Curtis Williams and Valerie Reubin and several marching bands from the likes of Selma High School and Dallas County High School.

This year’s parade brought a crowd, as several citizens, the majority of them on Broad Street, lined up to witness the unofficial beginning of the holidays.

Once the parade dispersed, there was no shortage of holiday activity for the citizens of Selma to continue to take part in.

Spectators showed up to take in the lights and decorations on the various trees decorated by local businesses to support the DCFRC while they sipped hot chocolate.

DCFRC Founder Jan Justice said this marks the third year of the River Walk Fundraiser and said the event has been good for the organization.

This weekend also happened to be 1st Saturday Selma.

People could be found along several stops, including Tinman Studios, The Harmony Club and The Selma Art Guild, making arts and crafts to celebrate the holidays.

Before a congregation of supporters, Carroll Bonner kicked of her campaign for Dallas County Tax Assessor Sunday evening at Potter’s... read more