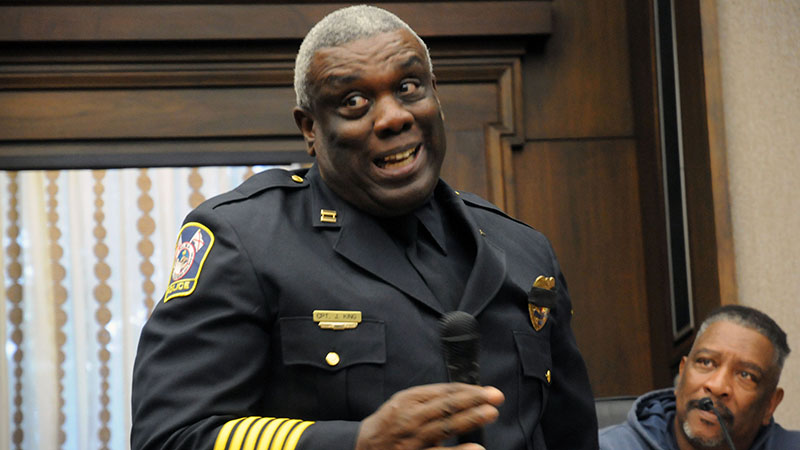 During a special called meeting Monday, the Selma City Council voted unanimously to name Selma Police Department (SPD) Capt. Johnny King the department’s interim chief, a post he will hold until the first of the year when a new chief will take the reins.

The need for a second interim chief came when current SPD Interim Chief Robert Green announced that he would be leaving the department effective Nov. 30, a little over two weeks before the council is set to appoint a new chief.

King’s appointment was not without controversy, however, as Selma City Councilman John Leashore motioned from the outset for King to be named chief until a new administration is put in office via next year’s elections.

Leashore said it would be “wise and prudent” to name King chief until next year’s elections, when a new administration could come in and change leadership in departments across the city, the SPD included.

Selma City Council President Corey Bowie agreed that King was capable of handling the job, but argued that the process, which began with interviews last week and will culminate in a selection being announced in two weeks, should be allowed to play out.

“I think it would be a wise decision for us to keep some stability in the force,” Leashore said. “We should not put that new chief in a ridiculous position, such as not being able to move forward with the position they were chosen for.”

Bowie again asserted that the selection process should be allowed to play out and Selma City Councilwoman Miah Jackson noted that, at this point, it would be unfair to the six applicants that have already interviewed for the position to appoint an interim chief for the next eight months.

Selma City Councilwoman Susan Youngblood praised King, but noted that the community has already been informed about the selection process, including an opportunity to meet the three finalists next week, and changing course would make for bad optics.

Leashore bemoaned “skullduggery” on the council and alleged that a faction of council members have already made a selection for the SPD’s next chief.

In the end, Leashore’s motion failed, with his vote the only one in favor, but a second motion to appoint King to lead the department until the end of the year passed unanimously.

At the end of the meeting, King expressed his love for Selma and his commitment to the SPD, saying that he is willing to work with the next chief and only wants the best for the department.

“I’m not going to run off,” King said. “I’m not going anywhere. This city has been so good to me, I just want to see it done right around there and it ain’t about me – the citizens of Selma deserve the best. I’m going to do things right. I’m going to treat people the way I want to be treated. I just don’t like the way things are going right now.”

After hearing King’s remarks, Leashore again asserted that the council’s best option was to select him to lead the department.

“There is nothing binding this council to moving forward with these six candidates,” Leashore said. “Capt. King is the man for the job. I want this council to be aware – simply because you’ve gone through the interview process…that does not bound you to do anything other than what you think is right.”