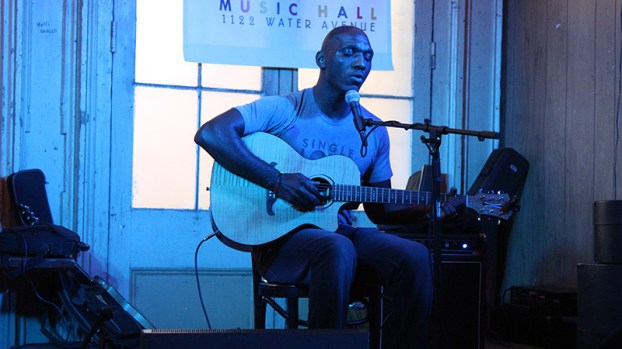 The event’s headliner, singer-songwriter John Paul White, was unable to make it to the Queen City, due to illness, but everyone in the venue Friday night didn’t seem to mind as they stomped their feet to three hours’ worth of blues music.

After White’s cancellation, the BBG put together an all new lin up for everyone who purchased a ticket to this year’s Art jam.

Rather than open, Grammy-nominated blues musician Cedric Burnside became the headliner and was preceded by the slide-guitar blues-rock stylings of Kenny Brown.

Burnside played drums behind Brown during the opening act, then picked a few acoustic songs before he switched over to the electric guitar as he was backed by Reed Watson on the drums.

Brown returned to the stage toward the end of Burnside’s set to lend his slide-guitar to the arrangement during the final songs of the performance.

In addition to the evening’s performance, those who purchased VIP tickets were treated to a dinner from Shindigs Catering of Birmingham and there was plenty of art for sale by local artists to put the “Art” in “Art Jam”.

According to BBG Executive Director Devon Gray, this year’s Art Jam was a great success.

Gray said she heard a lot of positive feedback from the community over the weekend.

After several months planning the event, Gray was happy to see it all come together.

“After you spend so long planning something, it’s just in your head,” said Gray. “The best part for me was seeing the plan come to life and everyone having fun. It made everything worth it.”

The Selma Rotary Club’s own Jeff Cothran, Executive Director of United Way, served as the speaker at Monday’s meeting of... read more