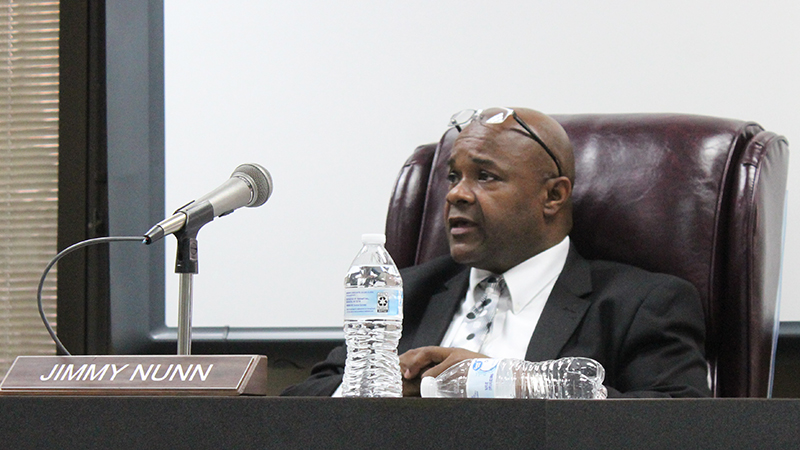 The Dallas County Commission held their second-to-last meeting of the calendar year on Monday night.
Dallas County Engineer Coosa Jones brought forth two items before the commission.
First, Jones sought approval from the commission to submit an application for a Rebuild Alabama Act grant.
The commission unanimously approved Jones’ recommendation to submit the application for the grant.
According to Jones, the $250,000 grant would be used to pay for the restriping of roads in all four districts of Dallas County.
Earlier this year, Jones had all four commissioners compile a list of roads within their districts which they thought needed to be restriped.
Based upon the list, a total of 24 Dallas County roads would be restriped if the county is awarded the grant.
“We’ve worked this out so that, if we get [the grant], then all four districts are going to be effected,” said District 4 Dallas County Commissioner Larry Nickles.
The grant is competitive and Jones said that Dallas County would be competing with all other cities and counties in the state of Alabama.
District 2 Dallas County Commissioner Roy Moore brought up the fact that the $250,000 grant would not cover that many miles of roads.
“We’re not talking about a lot of mileage here,” said Moore. “I just don’t want the public to have the misconception that this is going to be a cure-all for all of the roads in this county.”
Jones told Moore that it costs between $4,500 and $4,900 to stripe a mile of road.
The other item Jones brought before the attention of the commission was a cooperative service agreement with the U.S. Department of Agriculture (USDA) Wildlife Services for beaver control.
According to Jones, the agreement comes in the form of $5,000 which can be used by the county to combat beaver problems if any arise within any of the four districts.
After Jones’ report, Dallas County Environmental Services Director Kevin Edwards informed the commission that the cameras have been successfully installed at the Orrville transfer station.
“I think [these cameras] are going to go a long way in the months and years ahead in picking this trash up,” said Edwards.
Dallas County Attorney John Kelly had several items to discuss with the commission, the first of which was a resolution to set the county office hours from 8:30 a.m. until 4:30 p.m. and require that an employee be present during lunch hour.
The commission unanimously approved the resolution.
The second item Kelly brought before the commission was a resolution to approve a $1,500 contribution to Selma University.
“Mr. Chairman, I’m just delighted and happy to make that contribution,” said District 3 Dallas County Commissioner Curtis Williams. “Selma University is in dire need of funds and some great citizens have attended that school and made contributions to the state of Alabama.”
The other three commissioners joined Williams and the resolution to make the contribution was unanimously approved.
Third, the commission approved Kelly’s recommendation to renew the contract for Willie Bonnner, Manager of Jim Minor Garden Homes.
Finally, Kelly brought forth a request for proposal (RFP) for the lease of the Dallas County Sportsplex and the operation of county youth sports programs.
The commission, once again, unanimously approved the request.