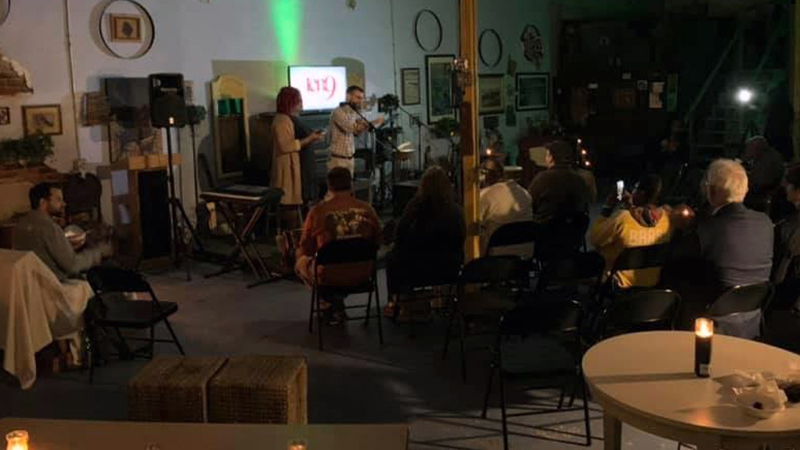 Around 40 people turned out last week at the By the River Center for Humanity on Water Avenue to take part in the inaugural TenX9 storytelling event, which began in Northern Ireland and has since made its way across Europe and into the United States.

The night of stories was the result of a collaborative effort between the Black Belt Community Foundation (BBCF), the Selma Center for Nonviolence, Truth and Reconciliation (SCNTR) and Truth, Racial Healing and Transformation (TRHT) Selma, part of a national program sponsored by the Kellogg Foundation.

According to SCNTR Community Organizer Brendan O’Connor, one of the people that worked to organize the event,

storytellers were sought “high and low” to provide a “wide mix” of stories.

To that end, O’Connor said, the event was a success, as storytellers ranged in age from teenagers to seniors and their stories ranged in style from funny to serious and everything in between.

“In divided times, stories seem to offer a bridge to walk in between folks,” O’Connor said. “It’s not that everyone is the same, or that they need to be, but that stories slow down our lives to a human pace where we can see and appreciate what’s different and what’s the same—both.”

The first storyteller of the night was 90-year-old John Pettaway, who “set the tone” for the evening with his story called “A Country Boy Came To Town.”

Pettaway snatched a flashlight from his pocket and shined it around the room while singing “This Little Light of Mine” before launching into his story, which recalled his move to town and his job “sackin’ groceries” at a local supermarket.

“He went into how he almost lit a match to see if the leak in the back of the shop was a gasoline leak, not realizing the explosive implications of doing that until after when his co-worker commented how dangerous it would be if someone did,” O’Connor recalled. “The rub was that the matches wouldn’t light and he was [as] thankful as they come that they didn’t.”

Other stories included one from 16-year-old Calvin Griffin, who recalled thinking that the swollen lymph nodes that accompany the common cold were indicative of cancer, to Old Depot Museum Executive Director Beth Spivey’s rousing tale of self-defense in the face of alligators.

Michael McRay, who established TenX9 Nashville, was on hand for the event and assisted O’Connor and others in launching the Selma event.

For his part, O’Connor hopes that the latest event is only the first of many to come.

“We are working our way through the details of how that may play out and of working our way to becoming a Tenx9 chapter, but we’re committed to it,” O’Connor said. “It was a bit of work, so we’re glad for folks to get in touch if they want to help with some of the planning or process.”