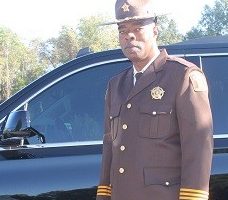 On Saturday night, Lowndes County Sheriff John Williams, who held the post since his election in 2010, was shot and killed while responding to a call at a OV convenience store in Hayneville at the corner of Hwy. 21 and Hwy. 97.

An 18-year-old suspect, William Chase Johnson, was apprehended after an hours-long search when he returned to the scene of the crime and surrendered to authorities.

“I’m saddened to hear about Sheriff Big John Williams, who was tragically killed this evening in the line of duty,” said Alabama Gov. Kay Ivey in a tweet Saturday night. “Through his service to our country in the United States Marine Corps and his many years working in law enforcement, he dedicated his life to keeping other people safe. He will be remembered as a consummate professional and pillar of his community.”

According to multiple news outlets, the shooting happened shortly after 8 p.m. Saturday night when Williams responded to a call from the owner of the convenience store, who reported a crowd of people in the store’s parking lot that he wanted to disperse.

About two hours later, the Alabama Law enforcement Agency (ALEA) issued a Blue Alert for Johnson, who was believed to be on foot and a risk to the public after reportedly abandoning a stolen vehicle that was recovered by authorities later.

Around midnight, Johnson returned to the convenience store and turned himself in to authorities without incidence.

Johnson was relieved of a firearm in his possession when he surrendered to law enforcement.

“Tonight, Alabama mourns the loss of another law enforcement officer in the line of duty,” said Attorney General Steve Marshall in a Saturday night statement. “Lowndes County Sheriff ‘Big John’ Williams died from gun fire while responding to an incident in Hayneville. Sheriff Williams devoted his life to law enforcement. He gave more than 40 years to public safety in his home county, serving the last 19 years as Lowndes County Sheriff. His dedication and experience are irreplaceable.”

Marshall noted that Williams’ death marks “the fifth line-of-duty death of an Alabama law enforcement officer to gunfire this year and the sixth to lose his life overall in [Alabama] over the last 11 months.”

“Serving the public in the role of a peace officer is a difficult calling, fraught with peril, yet thankfully many Alabama men and women choose to answer the call, often time putting their lives in danger to protect us,” Marshall continued. “It simply cannot be said enough that we owe these heroes our gratitude and our support.”