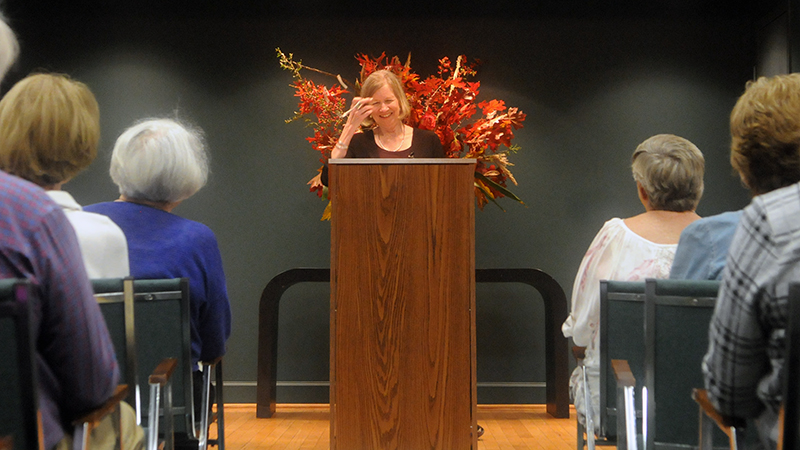 On Thursday, New York Times bestselling author Cassandra King Conroy stopped by the Selma-Dallas County Public Library as part of its “Lunch at the Library” series, which brings authors and other creatives to the area to discuss their work.

“This is an author of tremendous distinction,” said Selma-Dallas County Public Library Executive Director Becky Nichols. “She’s bringing to us a wonderful story about relationships.”

Conroy was on hand to discuss her latest book, “Tell Me A Story: My Life with Pat Conroy,” an autobiographical account of her relationship with author Pat Conroy, best known for his books “The Water is Wide,” “The Lords of Discipline,” “The Prince of Tides” and “The Great Santini,” the latter two of which were turned into Oscar-nominated films.

Cassandra King Conroy was last in Selma in 2006 promoting her book “The Sunday Wife,” a novel focused on one woman’s path to independence.

Cassandra King Conroy was born on a peanut farm in a town near Dothan and attended college at the University of Montevallo, where she later taught.

Cassandra King Conroy met Pat Conroy in 1995, just before the publication of her first book, at a reception – he immediately offered to write a blurb for her forthcoming book and the two started a friendship that turned to romance and eventually marriage.

While Cassandra King Conroy humorously bemoaned the rigorous schedule of her current three-week book tour, as well as previous tours, she noted that readers and writers have to lean on one another.

“You’ve got have readers and you, as book lovers, have to have writers,” Cassandra King Conroy said. “So, we’re kind of in this together.”

All of the proceeds from books sold during Thursday’s event will go toward the Pat Conroy Literary Center.

To learn more about Cassandra King Conroy or to purchase one of her books, visit www.cassadrakingconroy.com.