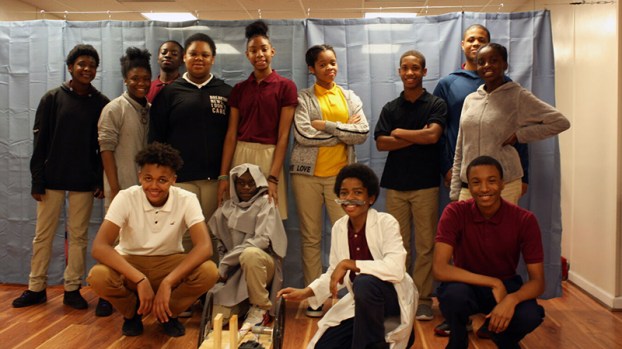 On Thursday afternoon, students in the Edmundite Missions’ New Possibilities Youth Program performed their original play “Science Fair Gone Wrong,” which gave the students an opportunity to look at the fundamentals of science, technology, engineering and mathematics (STEM) from a different perspective.

“We always have a focus on STEM, but want to make sure the students know things like science and engineering have a part in many different careers,” said Edmundite Missions President and CEO Chad McEachern. “For this month, we discussed the role STEM has in play production.”

McEachern said the students, many of which had never before been involved with stage productions, had the opportunity to go backstage at a professional performance and studied the behind-the-scenes engineering used to bring plays to life on Broadway and in London.

McEachern said that the students began working on the play a few weeks ago and were enthusiastic about bringing it to the stage.

“The students have absolutely loved putting the play together and the teachers have helped to always bring the lessons back to our STEM focus,” McEachern said. “Despite a few last-minute cases of stage fright, I’d say they’ve had a wonderful experience.”

And while the focus was on STEM education and how those fields are involved in a variety of industries and crafts, McEachern noted that it’s important to provide young people with a creative outlet.

“Creativity is the lifeblood of education,” McEachern said. “Although the arts are often the first thing let go for our students, it is such an important element and sparks deeper understanding of English language arts, science, math and so much more.”

Though no future plays are currently in the works, McEachern said that the Edmundite Missions would likely put other performances together and looks forward to hosting them in the Missions’ new state-of-the-art Dr. Michael and Catherine Bullock Community Center.

“Judging by the success of this production, I think we’ll definitely repeat this project with future members of our New Possibilities Youth Program,” McEachern said.

DFC gives thanks to community partners with annual luncheon

Drug Free Communities of Dallas County held its annual Thanksgiving luncheon on Thursday afternoon to show thanks to the organization’s... read more