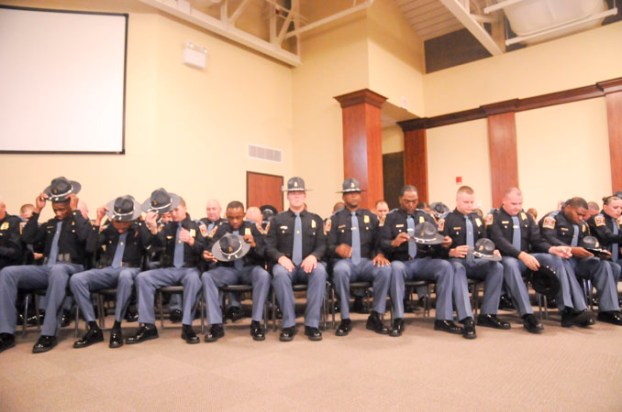 Fifty-five trainees from the Class of 2019 graduated, representing ALEA’s largest class since 1997. Funding from Governor Kay Ivey and the State Legislature produced the 55-member class.

Wasden, the Class President, urged his classmates to exceed expectations as a state trooper.

“Be a good state trooper, be a good person, be a good husband and be a good wife,” Wasden said. “Never lose sight, forgive often and find a way to win. This job isn’t stumbled upon. It’s an honor to be in law enforcement.”

“You’re here because you care about your neighbors and want them to live in a secure world,” Franklin said. “You didn’t do it for the fame or the money. You’re not only state troopers, you’re also ambassadors to the criminal justice system.”

Franklin also spoke about the law enforcement’s reputation in the public.

“Too many people see law enforcement as the enemy,” Franklin said. “People are more afraid of law enforcement than they are criminals. There’s no us versus them anymore, it’s right or wrong. It’s how you react that matters. You must not forget that you’re here to serve.”

On Wednesday, Alabama Gov. Kay Ivey announced that she had awarded $18.7 million in grants for improvements in 58 Alabama... read more