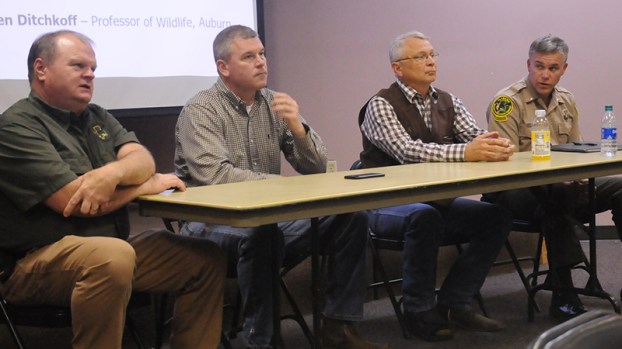 The Alabama Division of Wildlife and Freshwater Fisheries (WFF) held a public meeting to provide information about Chronic Wasting Disease (CWD) to the people of Dallas County on Tuesday night at the Central Alabama Farmer’s Co-Op.

CWD is a fatal disease that affects the central nervous system of deer.

According to WFF Deer Program Coordinator Chris Cook, humans cannot contract the disease and neither can any other animal outside of the cervid family, which also includes moose and elk.

Cook said that the disease is spread through deer-to-deer contact.

While no cases of CWD have been found in Alabama to date, instances of the disease have appeared in two bordering states, Mississippi and Tennessee.

Public meetings, like the one that took place at the Co-Op Tuesday, are part of a proactive effort by the WFF to prevent the disease from penetrating state lines.

Before Cook gave a presentation on the finer points of CWD, the WFF played a video message from U.S. Sen. Doug Jones, D-AL, on the importance of preventing the disease from arriving in Alabama.

In the video message, Jones referred to deer hunting as not just a pastime, but a way of life for the people of Alabama.

Jones commended the effort that the WFF is taking in educating Alabamians about the disease and also shared a warning about what CWD could do to Alabama’s economy.

“Deer hunting is a big deal for our state’s economy,” said Jones in the video. “In fact, if hunting were a company, it would be in the top 100 on a Fortune 500 list.”

During Cook’s presentation, he elaborated more on how CWD could affect the state’s economy.

According to Cook, if CWD infects the state’s deer population, it will lead to a decrease in its quality, resulting in fewer hunters.

The loss of hunters will cause monetary loss for those who sell hunting licenses and hunting equipment and accessories.

Lt. Michael East, WWF Game Breeder and Captive Wildlife Coordinator then took to the podium after Cook to share with the audience laws and regulations the state has enacted to prevent the spread of CWD in Alabama, including the restriction of the movement of live deer within the state to licensed game breeders and their clients and the illegalization of importing deer across state lines.

After Cook and East delivered their presentations, the two men were joined by Dr. Tony Frazier, State Veterinarian with the Alabama Department of Agriculture and Industries (ADAI), and Dr. Stephen Ditchkoff, Professor of Wildlife at Auburn University, for a panel in which the four experts answered questions from the audience.

Several questions regarding the consumption of meat from a CWD-positive deer were submitted to the panel.

The WFF stressed that they are not a food consumption agency and that such matters should be referred to the Centers for Disease Control and Prevention (CDC).

During its meeting Monday, which was moved up to accommodate the upcoming Thanksgiving holiday, the Selma City Council wondered aloud... read more