Traversing the alleyways of Selma 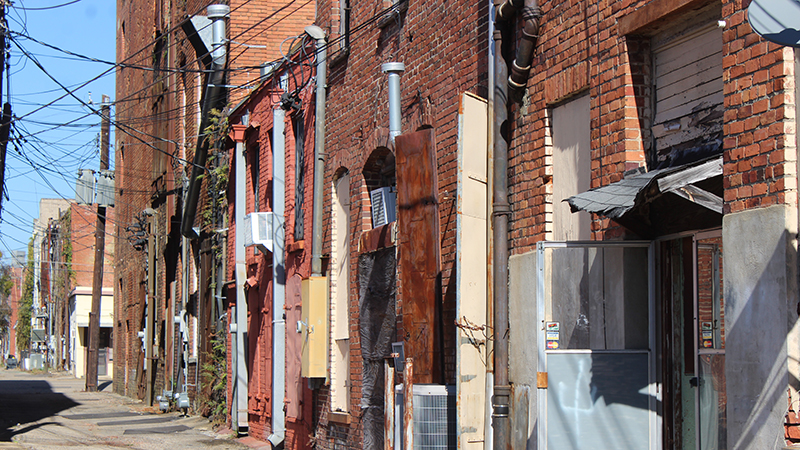 When running the daily routes through town, stopping in at various meetings or functions to talk with folks about one thing or another, sometimes hardly knowing which it will be, I make a point to careen through the maze of alleyways that run behind the strips of buildings in downtown.

It’s a habit with no specific origin, but I find wonder in these hidden concrete paths, pondering what these alleyways looked like in some age past, wondering if people stood under street lights just beyond the back doors of the building, contemplating what each of the little storefronts once held and if their workers sneaked away for a cigarette or a couple of minutes off the clock in these brick-walled tunnels.

Montgomery has similar urban hideaways, but they don’t connect the same way that the footways in Selma do – the ones in Montgomery often dead end into an ivy-covered brick wall, while Selma’s open up to streets and keep going on the other side, with the ever-present option of shifting left or right down some other avenue to wind up on some other well-traveled street.

There’s art in these walkways, an art that some never really appreciate or spend time enjoying, in the mismatched, discolored bricks and the thousands of hues covering each forgotten doorway, the drooping powerlines that cast wavy shadows across the ground and walls, the contrast of a deep blue sky and an ever-observing water tower to cold, rusted staircases and tiny sprigs of foliage spilling out of the cracked bricks.

There’s sound there, too, the ticking of gas and water meters, the hum of electricity from the power boxes overhead and strapped to the backs of buildings, the roaring echoes of cars streaking down a nearby street, the clatter of nearby work and nearby conversations and nearby people moving toward nearby places.

A symphony and visual masterpiece of accidental design, set in places mostly hidden from the eyes of passersby and certainly never intended as anything more than the space between and behind rows of buildings.

History lives here – not just the kind that gets discussed in high school classes, but the kind that can be imagined when looking upon stairways that lead to nothing, gaps beneath buildings and shards of brick scattered across a desolate asphalt cavern.

Whose business once sat here? Whose footsteps once echoed off of these walls? Whose memories are housed here and when will they know company? There is so much to wonder about and hardly enough time to wander.

For my part, I recommend a quick walk through some of these stretching avenues – one hardly knows what can be found there and, without the wandering and wondering, one surely never will.

Trials, tribulations and my first lobster