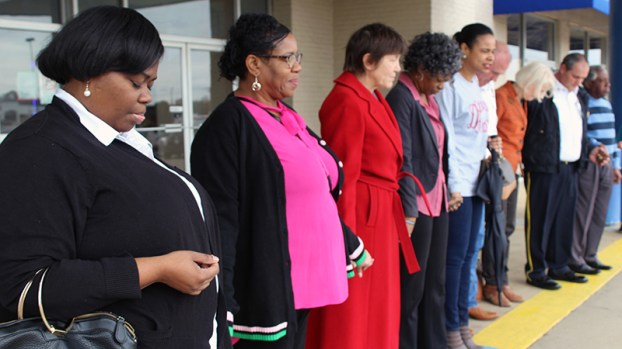 A handful of city leaders and citizens met in front of the Selma Mall Friday afternoon to take part in Selma City Council President Pro Tem Angela Benjamin’s first “Mall Walk,” an event aimed at bringing foot traffic to the mall and showing appreciation for the retail operations inside.

Benjamin is hoping that her effort will spurn merchants in the mall to shake things up for the holidays by adding festive displays and playing holiday music over the building’s loud speakers.

“Nothing says shopping like holiday music playing in the mall,” Benjamin said.

Beyond the holidays, Benjamin would like to see the mall’s fountain bubbling again.

The group gathered in front of the mall shortly after noon and, after a prayer, embarked on a stroll through the mall, stopping in various stores, like Z’s Fashion and Vinyl Express, to speak with shop owners and make a few purchases.

Benjamin said she envisions hosting similar event that will bring shoppers to other “pockets of business” across the city – the mall was simply the first stop, as it’s located in Benjamin’s ward.

“This is a boost for all of us,” Benjamin said.