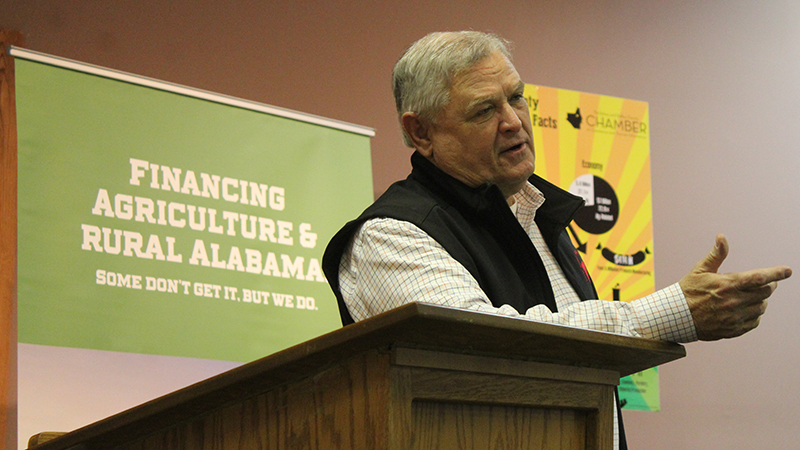 The Selma-Dallas County Chamber of Commerce hosted the annual Farm-City Buttonhole Breakfast at the Central Alabama Farmers Co-Op on Thursday morning.
The annual event, sponsored this year by Alabama Ag Credit, is a celebration of agriculture and the contributions of farmers to our community.
“I think young people sometimes take [farming] for granted,” said Selma-Dallas County Chamber of Commerce Executive Director Sheryl Smedley. “They don’t understand the process.”
Jimmy Holliman, President of the Dallas County Farmers Federation, said the event is a great way to bring in people to learn about “the process.”
“This [event] brings people in and they realize that food doesn’t come from the grocery store,” he said. “Agriculture is one of the biggest industries in Alabama, so they need to know the importance of that.”
Holliman said that Dallas County is a large contributor to Alabama’s agricultural industry.
“Dallas County has very diverse agriculture, from cattle to catfish,” he said.
Dallas County Extension Coordinator Callie Nelson spoke at the event to share with those in attendance how agriculture is being taught in schools.
Echoing Smedley, Nelson said that many people don’t quite understand the connection between farms and food.
“It’s so important that we never lose sight of that connection [between food and farms],” said Nelson.
After Nelson spoke, Holliman came to the podium to introduce the event’s keynote speaker, Alabama Commissioner of Agriculture Rick Pate.
Pate, a native of neighboring Lowndes County, was elected as the 30th Alabama Commissioner of Agriculture in 2018.
Pate used his time at the podium to share the positive developments within Alabama’s agricultural industry, including a fascination amongst consumers with locally-grown products, a positive inaugural year for the state’s burgeoning hemp crops and, finally, Pate expressed his gratitude for having the opportunity to serve as the state’s Commissioner of Agriculture.
“I try to never end one of these talks without telling people what a privilege it is to be commissioner of ag,” Pate said. “I feel such a responsibility to Alabama agriculture and Alabama farmers.”