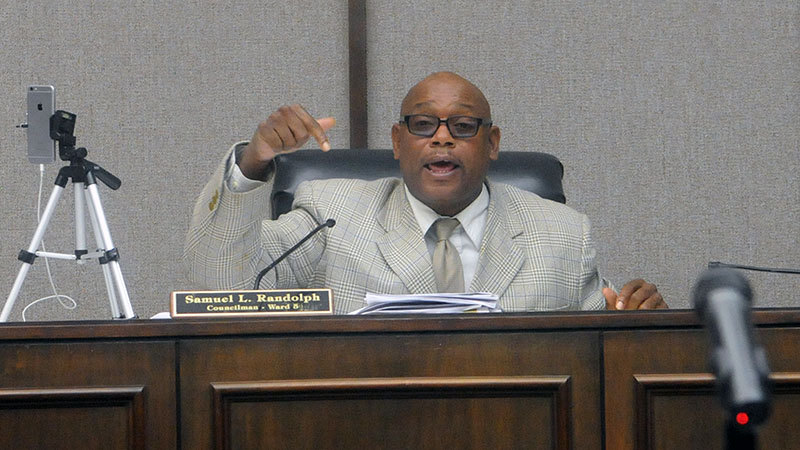 During a contentious Selma City Council meeting Tuesday night, in which members were at odds over suggestions proposed by Brown Chapel AME Church Pastor Leodis Strong to resolve ongoing issues between the council and Selma Mayor Darrio Melton, Selma City Councilman Sam Randolph discussed his 2018 public lewdness charge, which was recently tossed out.

Randolph turned himself into the Selma Police Department (SPD) on May 11 last year after an incident a month earlier – according to a press release issued by former SPD Chief Spencer Collier at the time of incident, Randolph was seen “urinating” in an area “readily visible to the public.”

Randolph said the charge was recently thrown out after his attorney, Faya Rose Toure, filed a motion to dismiss the charges, as Randolph has neither been arraigned or gone to court over the “bogus charges.”

During Tuesday night’s meeting, Randolph berated Collier and Melton for what he called an “orchestrated” effort to silence him.

Randolph encouraged the “mayor’s buddies” on the council to make sure that he’s aware of the councilman’s demands – if they go unmet, Randolph plans to file suit in federal court over the damage done to his reputation as a result of the “so-called lewdness.”

Randolph’s comments sparked a fiery response from Selma City Council President Pro Tem Angela Benjamin, who offered her condolences over the fact that Randolph was forced to endure such a debacle.

Elsewhere in the meeting, SPD Interim Chief Robert Green announced that he would be leaving the department effective Nov. 30, which throws a wrench in the council’s plans of extending his contract through the end of the year.

Selma City Council President Corey Bowie stated that the council would proceed with interviews for all six of the candidates eying the position on Nov. 20 and a new chief would be announced at a special called meeting thereafter.

• a resolution authorizing AT&T to modify an existing tower located on U.S. Hwy. 80 West to provide wireless services within the city’s corporate limits and police jurisdiction;

• a liquor license for Ultra Grand Lounge, located in Ward 8;

• a fee waiver for the Selma City Vikings football team to use Memorial Stadium during its upcoming season;

• moving the dates of upcoming council meetings to Monday, Nov. 18 and Tuesday, Dec. 17 to work around the upcoming holidays.