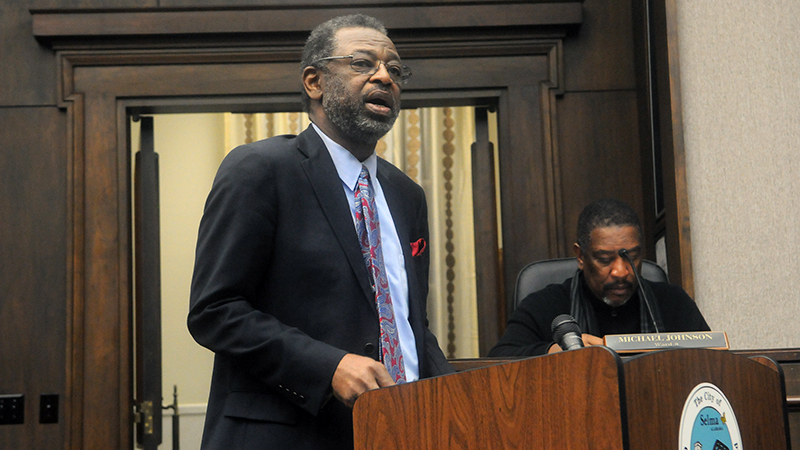 During its meeting Tuesday night, the Selma City Council spent roughly half an hour blasting suggestions from Brown Chapel AME Church Pastor Leodis Strong that the council and Selma Mayor Darrio Melton should set aside their differences and use “common sense” for the “common good.”

Strong called the current struggles plaguing the city, from garbage and potholes to political dysfunction, a “self-inflicted crisis” and chided the council and mayor for the “childish squabbles” that have kept those issues from being resolved.

Strong made a series of recommendations, including bringing back the workers laid-off last year and having the mayor and council enter into “binding mediation” to resolve their ongoing issues before Friday of next week.

The blowback from the council was swift.

After Selma City Council President Corey Bowie noted that his proposed exploratory meeting, which was shot down in preference of a meeting between the chairs of the Public Works and Recreation committees, would have addressed many of Strong’s concerns in a manner close to his suggestions, Selma City Council President Pro Tem Angela Benjamin blasted Strong’s suggestions.

Benjamin noted that the council had voted and appropriated money previously to bring the laid-off workers back to no avail and blasted Strong for “being contrite.”

“Not one single one of us can bring an employee back,” Benjamin said. “But guess who has the authority to press the send button and the magic happens.”

Selma City Councilman Sam Randolph joined in the chorus, taking exception with Strong’s use of the word “childish.”

“I’m confused why you’re here anyway, because we didn’t lay the workers off,” Randolph said. “Everything you’re talking about is in the mayor’s office. You’re trying to blame us for his stupidity? I think you should have went to him with this mess first.”

Randolph accused Melton of being “anti-people” and “anti-youth.”

“Every time he gets mad at the council, guess what he’s going to do,” Randolph said. “Take it out on the citizens.”

For his part, Selma City Councilman John Leashore apologized to Strong for the “tongue-lashing” he received from other council members and lauded his recommendations as “gospel truth.”

“I don’t need anyone up here apologizing for me,” Benjamin said. “I speak for myself.”

Benjamin blasted last week’s meeting, in which City of Selma Public Works Department employees voiced their concerns in a public setting, insinuating that employees that might have felt intimidated were compelled to lie in the interest of self-preservation.

Thomas likewise took exception to the recommendation that the council should work to extend an olive branch to city hall, noting that council members have stepped up to fill the gaps left by an absentee mayor.

“We’re strong leaders because we came out,” Thomas said. “Can you tell me, did any executive, the man that runs the city, step out of his box to go with us and try to make a change? I’ve been fighting for working folks all my life. I pick up trash, I go out in the community, I help everybody.”

Echoing Leashore, Selma City Councilman Michael Johnson apologized to Strong for the treatment he received from other council members and applauded him for the good ideas he presented.

Johnson recommended that the council vote again to bring back the laid-off workers and approve a raise for city workers, but the motion was eventually recalled as multiple council members noted that raises would need to be addressed during the ongoing budget process.

Also on the agenda Tuesday night was Chris Minter, whose comments contrasted wildly with Strong’s in applauding the council’s commitment to the city and its citizens while slamming the mayor.

“Our city is deprived of certain things simply because we’ve got too many boys and too many girls trying to handle men’s jobs and women’s jobs,” Minter said. “This is the only council I know that has worked and kept this city afloat in the absence of leadership. I’ve attended more meetings than the leader of this city. That’s sad.”

Minter noted that the council’s votes make little difference, as the mayor continues to refuse to adhere to any of the policies it has put in place.

“Obviously, the mayor doesn’t regard y’all as a council,” Minter said. “No matter what y’all put in place…it’s almost as if y’all aren’t saying anything. And Selma is long overdue for a change.”

Both Benjamin and Randolph applauded Minter’s statements and urged other workers and disaffected citizens to speak up.