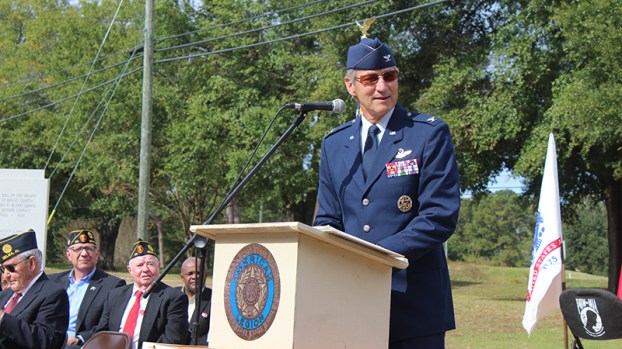 American Legion Thomas R. Mackin Post 20 held its annual Veterans Day program Monday morning at Memorial Stadium.
Veterans and their families from all branches of the U.S. military attended the event as the community came together for celebration and remembrance.
Several elected officials were in attendance Monday, including Dallas County Probate Judge Jimmy Nunn, Dallas County Commissioner Valerie Reubin, Selma City Council President Corey bowie and Selma City Councilwomen Miah Jackson and Jannie Thomas.
Lt. Col. Steve Ruiz, Air Force JROTC Instructor at Southside High School, served as the program’s Master of Ceremonies.
After a moment of silence, Ruiz led the crowd in a rendition of each branch of the military’s songs before Joe Thomas of American Legion Post 324 sang “I’m Proud to be an American”.
Former Dallas County Probate Judge and American Legion Post 20 member Johnny Jones then took to the podium to introduce the event’s guest speaker, Ret. U.S. Air Force Col. Jim Corrigan, who currently serves as Executive Director for the Craig Field Airport and Industrial Authority (CFAIA).
“Today is a day where we show honor and our gratitude to all those military professionals who have served the United States,” said Corrigan.
Corrigan challenged all of the veterans in attendance at Monday’s program to “tell their story” and inspire a younger generation.
In closing, Corrigan expressed his appreciation for all veterans.
“For those who came before me, to those I’ve had the privilege to serve with and to all those who have fallen, thank you for your selfless service,” Corrigan said. “God bless you all for being here and God bless the United States of America.”