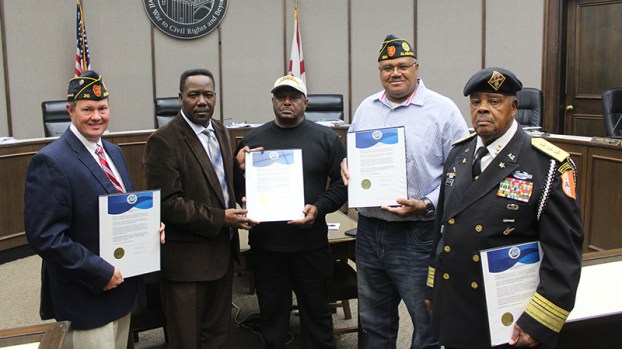 On behalf of the Selma City Council, Selma City Council President Corey Bowie presented local veterans groups with proclamations, thanking them for their service, on Friday afternoon in recognition of Veteran’s Day on Monday.

Bowie met with representatives of American Legion Thomas R. Mackin Post 20, American Legion Post 324, DAV Chapter 61 and the VFW and thanked them for their service and sacrifice.

“Every day should be Veteran’s Day,” said Bowie. “Oftentimes, veterans are forgotten, but this is a small token of appreciation for all that you do for our country. You are truly ambassadors of our country, providing us with opportunities we often taken for granted. You payed a price to defend our glory and also our land and I truly, truly appreciate all that you do. I can’t say it enough.”
Bowie also thanked American Legion Post 20 Adjutant John Coon for his work representing local veterans.

Coon was also in attendance to spread the word about Monday’s annual Veteran’s Day Program at Memorial Stadium to be held at 11 a.m.

Corrigan previously spoke at the Veteran’s Appreciation Breakfast hosted by the MJ 93-90 Foundation and The Selma – Dallas County Chamber of Commerce on Thursday morning.

“We’re going to have a great program this year,” said Coon.

A Selma man was convicted of capital murder by a Dallas County Grand Jury on Thursday in a six-year-old case.... read more