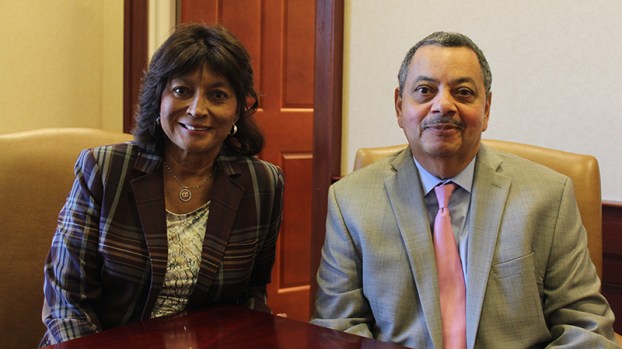 Mitchell was accompanied by the book’s author, Linda Eatmon-Jones.

The two signed copies of the book at the Barnes and Noble Student Center on WCCS’s campus from 11 a.m. until 2 p.m.

Eatmon – Jones said she interviewed over 40 people within the community about the impact of Mitchell on their lives.

Eatmon – Jones said while everyone she spoke with was impacted by Mitchell in a different way, they all spoke of his dedication to higher education.

“[Mitchell] will leave no stone unturned to ensure that every student that wants an education gets one,” said Eatmon – Jones.

“I’m very humbled,” said Mitchell on the publication of his story.

Eatmon – Jones, who is a cousin of Mitchell’s, said her cousin was hesitant about having a book written about him.

“He’d say that there’s a million people who do what he does,” she said.

Despite Mitchell’s reservations, Eatmon – Jones talked him into the process.

The author felt it was important her cousin’s story be told – she referred to Mitchell as an “unsung hero,” the kind of person who becomes a role model for so many people they can’t even see them.

Mitchell hopes that others are inspired by his story to help others.

“If you have the opportunity to help, help,” he said.