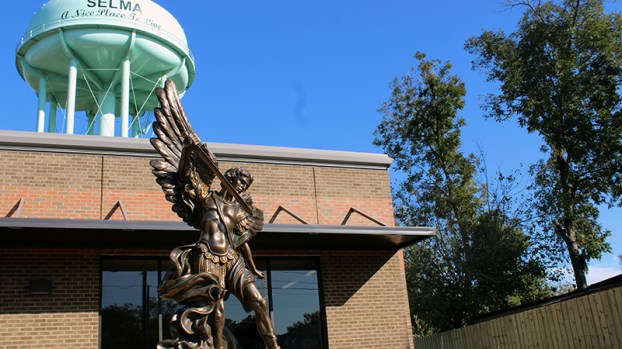 Selma Police Department (SPD) officers were directing traffic on Broad Street as drivers slowed to a stop to allow people to cross the street to attend the dedication ceremony for the Edmundite Missions’ Dr. Michael and Catherine Bullock Community and Recreation Center Tuesday afternoon.

Just outside, in a courtyard adorned with a statue of St. Michael the Archangel, the Selma High School choir sang as people took their seats and waited for the ceremony to begin.

Edmundite Missions President and CEO Chad McEachern welcomed everyone and introduced Catherine Bullock, one of the namesakes of the new building, who noted that she wished her husband, Dr. Michael Bullock, could be present to see the Missions’ “wonderful” building.

Dr. Michael Bullock, who died in 2015, was praised in the event program as someone who “learned early the twin virtues of self-discipline and hardwork.”

Michael Bullock, the program noted, joined the Air Force at 18 and worked his way through medical school, becoming first a medical technologist and later a pediatrician, saw the need and potential of youth in the Deep South and became a “generous” supporter of the Mission.

“While the Missions have been serving this community for more than 80 years, most of that work has been done one-on-one,” McEachern said. “This center allows us to serve the community as a whole.”

McEachern noted to the audience that on this day last year, the Edmundite Missions hosted a groundbreaking ceremony on the land now sitting beneath the concrete slab of the building they were siting in.

McEachern noted that it was “by the grace of God” that everyone was able to gather in the building, which faced a number of setbacks during construction, including weeks of rain, sewage issues, asbestos, bad soil and more.

After a round of singing, Archbishop Thomas Rodi, followed by a contingent of Edmundite priests, led those in attendance in introductory rites which signaled the beginning of the official dedication ceremony.

Later, the archbishop walked from room to room blessing the facility before doing the same for the building’s Good Samaritan Garden.

“Today, we mark the beginning of a new, giant step forward in helping our neighbors break the cycle of intergenerational poverty that has held them back for so long,” McEachern was quoted as saying the ceremony’s program. “Today, we celebrate the completion of this physical structure. But, with your support and God’s infinite love, the blessings it will bring will be with us for many years to come.”

Committees hear from striking workers, others