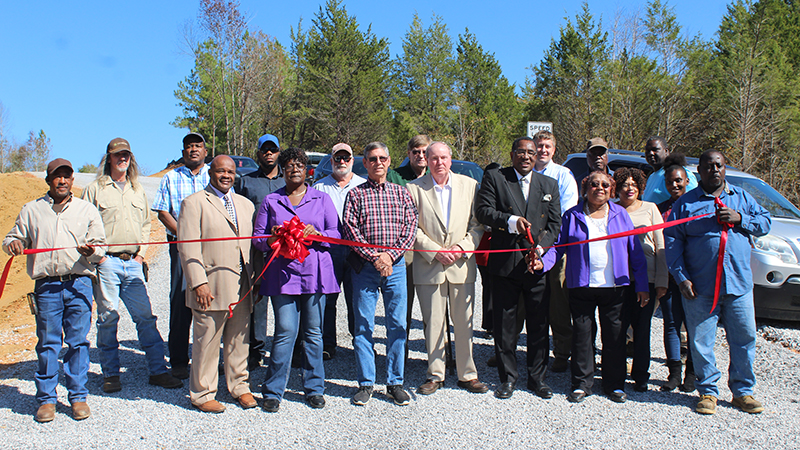 Dallas County officials celebrated the completion of the relocation of County Road 205 at a ribbon cutting ceremony on Wednesday morning.

According to a report on the projects issued by Dallas County Engineer Coosa Jones, a road slide occurred on County Road 205 earlier this year.

Jones’ report states that the road slide made the road impassible except for one lane, one-way traffic.

Emergency vehicles, school buses and postal services were unable to access County Road 205’s residents, which include children and the elderly.

The report states that Dallas County was unable to repair the road slide because the one-lane road would have had to be completely closed in order to repair the slide – the county had no choice but to relocate the section of County Road 205 so as to not completely cut off its residents.

To complete the project, Dallas County had to acquire a right-of-way to build a new, relocated section of County Road 205 that ties into the old road on both ends, providing access for residents and anyone else needing access to the road.

Selma – Dallas County Chamber of Commerce Executive Director Sheryl Smedley was happy for the 205 residents and amazed by the Dallas County Road Department’s feat of construction.

“They pretty much carved a new road out of the wilderness,” she said.

Dallas County Commissioner Curtis Williams, who represents District 3 where the road is located, was excited to see the project completed.

“It’s good we have such good County Commissioners,” he said.

Nickles said it was the duty of the Commissioners to reach out to one another for help in times of need.

“We may represent different districts but we are one body of government,” he said.

Nunn called the ceremony “a great day for Dallas County,” citing the completion of the project as the result of the commission working together with the county.

Williams also commended Jones and the road department for their hard work in seeing the project completed.

Finally, Williams thanked his wife, Geraldine, and his family for allowing him to spend so much time checking on the road’s progress.

St. Paul’s gets ready for Lobsterfest