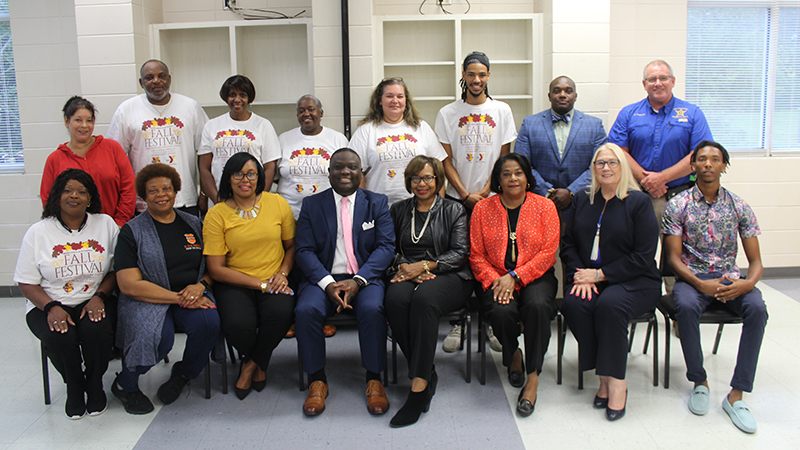 The YMCA Selma – Dallas County Board of Directors and representatives of the MJ 93-90 Foundation met at the YMCA on Wednesday afternoon to discuss Saturday’s Fall Festival.

The festival is set to take place at the YMCA from noon to 5 p.m.

The event will feature games activities and food in a family-friendly setting.

Williams said the two organizations have been hard at work this week to ensure a successful fall festival on Saturday.

“Everything is running smoothly,” he said.

Johnson thought it would make sense for the two organizations to partnership in order to host a festival, because both organization promote activeness in youth.

“We plan to have a long term partnership,” said YMCA Chief Visionary Officer Juanda Maxwell. “We have very similar goals. We’re about mind, spirit and body.”

The meeting was also used kick off the YMCA’s Annual Giving Campaign.

“We’re working to get as many memberships as we can between now and the end of the year,” said YMCA Board Member Billy Young. “The YMCA needs memberships to survive.”

Young added that the YMCA is currently running a special on memberships for $30.

“We are also soliciting individuals, organizations, churches and anyone else that loves the YMCA and that loves Selma to make donations,” said Young.

Several other YMCA Board Members spoke about the importance of the YMCA to the community.

“[The YMCA] gives them a place to come in and freely and safely be a kid,” said Latonia Tisdale.

“It really builds our kids up and provides them with a safe place to play,” said Lt. John Treherne of the Dallas County Sheriff’s Office. “When families attend together it really encourages family unity.”