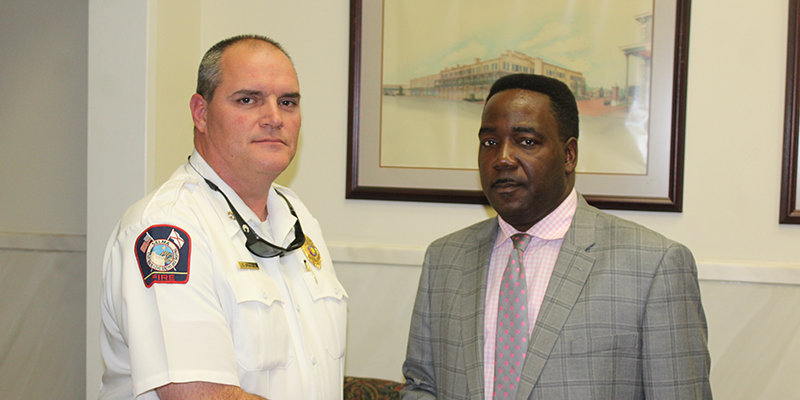 Graham has led the local department since the departure of former SFD Chief Toney Stephens earlier this year and has been with the department for 24 years.

Graham said the needs he thinks should be addressed is manpower.

“We need people,” he said. “We need them to provide a service of fire protection to this community. That is a challenge right now. We are pretty low right now on manpower. We have a lot of work in hiring individuals. It starts from the top. You have to have a very strong leader. I feel like I am that person that can do that. We have to increase the pay. We have to hire some individuals within our community also outside of our community.”

During his time as interim chief, Graham has already been working to fill positions.

“We have some positions that have to be moved up,” he said. “There’s going to be some more hiring being done to protect the citizens. I also want to open Station 5.

“I have to hire at least 10 right now,” he said talking about firefighters for Station 5. “It takes time to actually develop individuals in the next step in their career. As you move those individuals up you still have to bring in more. We have 26 vacancies at the Selma Fire Department so it will take a while to fill those spots. If I can get at least 10, we will be on track to getting Station 5 back open.”

Graham said he wanted to thank those in the fire department who continue to work now.

“We have an outstanding department right now because we have a core of individuals who have hung in there and we are looking for more individuals like that,” he said.

Selma City Council President Corey Bowie said the decision to make Graham the fire chief came from his vision to build manpower in the department.

“His vision and also his forward-thinking is what made the decision for us,” he said. “I think he will do a good job. I feel like he will move forward with both objectives. He already has five firefighters in training.”

Bowie also credited Graham’s advancement through the ranks of the SFD as another important part of the position.