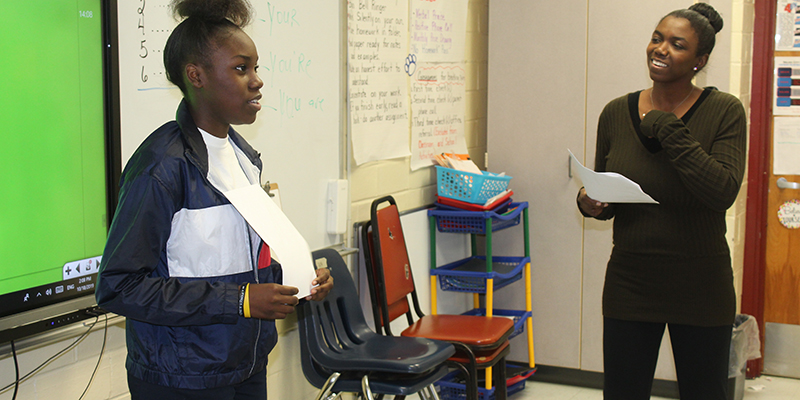 The company began in 2012 with the production of the short film “Carolyn Somebody” and completed their first feature film “Traces of Indignity” in 2014, that revolves around a wealthy African American character whose “focus was not only entertaining the masses but to also promote, uplift and inspire others but not without some faults and indiscretions.”

“The whole purpose of today was to teach them on camera acting techniques and auditioning in particular,” Williams said. “I also wanted them to have an understanding of becoming an actor. Alabama is not particularly an entertainment state. I began with asking them their career paths and getting a general idea. None of them said acting, which is not unusual. I went through explaining the process of becoming an actor and talked about movies like ‘Blank Panther’ and then they kind of pepping up. My whole purpose is just to give them an idea of acting and how to become and actor and audition.”

Williams said working with the students “touched her heart.”

“It was great,” she said. “It was a joy for me. When I see I’m making an impact and see their eyes light up then my eyes light up. I always love talking to children and getting them interested in acting. It makes my heart full. When I was in school, I didn’t have the arts. I wasn’t exposed to the arts until college. It is important to me to do this with them because I missed out on it in school. I feel like a lot of times we do miss out because we don’t prioritize arts up there with everything else and I think we should.”

R.B. Hudson is the second school that Williams has worked with.

“I taught a workshop in Montgomery last month,” said Williams. “I’m trying to be added onto more rosters.”

“Alabama Blue is a cop show based on the lives of three women,” she said. “I decided to write that story because it is something that we rarely see. We always see male and female co-leads but I wanted to spotlight women and how they handle home life and work life. I think in my experience, that women handle things a little bit differently. They do the same job and then they go home and they’re still wife, still mom and help with homework and things like that.”