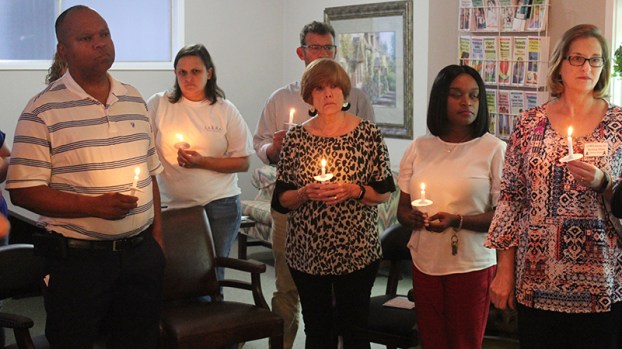 SABRA Sanctuary serves Dallas, Perry, Wilcox, Marengo, Greene and Sumter Counties by providing a safe place for victims of domestic violence by offering shelter, support, counseling and a myriad of other services.

SABRA Sanctuary Executive Director Barbara Miles was happy with the size of the group of supporters that came out to the vigil on Wednesday night.

“Our mission is to realize that [domestic violence] is a social issue,” said Miles. “It effects everybody. Every economic status, age, race, creed or religion. It effects all of us.”

The Candlelight Vigil consisted of a few opening remark by Miles, who briefly explained SABRA’s mission and services before providing a few statistics about domestic violence.

Both women shared the trials they suffered while in abusive relationships, and then shared how much better their lives are now that they have left the relationships.

Both women encouraged everyone listening to end a relationship at the first sign of violence.

“Run, don’t walk,” said Pope. “Get out. There’s no excuse for that kind of behavior.”

Following the testimonies of the two women, Janice Jones-Simms, a sexual assault counselor with the Family Sunshine Center, shared a poem with the group before the candles were lit.

Sara Jean McAteer sang a song while the group of observers held their candles before the ceremony was concluded with a prayer.