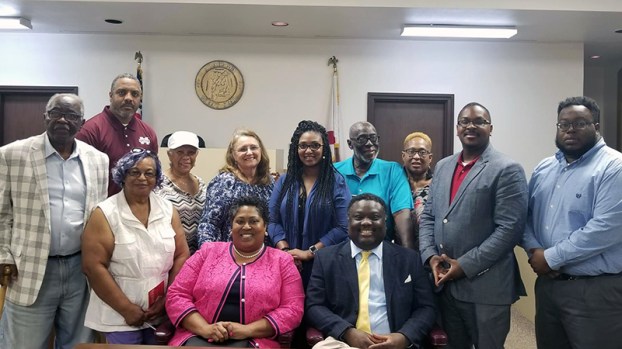 Amid an ongoing flurry of controversy within the Alabama Democratic Party (ADP) over leadership, contested elections, outdated bylaws and more, the State Democratic Executive Committee (SDEC) held a meeting in Montgomery Saturday to approve new bylaws per a dictate from the Democratic National Committee (DNC).

Just under 80 of the 250 SDEC members showed up for the meeting and approved new bylaws and established new caucuses in an effort to set up new elections for party chair and other leadership posts.

The actions taken by the inner-party faction Saturday, led by Alabama Rep. Chris England, D-Tuscaloosa, face an uncertain future as ADP Chair Nancy Worley, who credentials have been stripped by the DNC, prepares for a meeting this Saturday.

Though no one from the Dallas County Democratic Executive Committee (DCDEC) was on hand for Saturday’s meeting, Vice Chairman Billy Young says the local party is keeping an eye on the goings on at the state level and working locally to recruit candidates for next year’s elections.

Young made no claim as to what branch of the party – those standing with Worley and longtime party leader Joe Reed, who have asserted foul play on the part of local dissidents and U.S. Sen. Doug Jones, D-AL, who launched a “Fix the Party” campaign to bring about change in the state party, or the upstart faction attempting draft new bylaws and caucuses on the order of the DNC and to the chagrin of state party leadership.

While some who attended the meeting last Saturday, including England, will not be present for Worley’s meeting this weekend, Young is hoping to attend the event to “observe on behalf of the Dallas County Democratic Executive Committee (DCDEC).

While the internal disputes continue in a Democratic Party that has seen its power all but eliminated over the past several election cycles, Young and Dallas County Democrats are looking to qualify candidates for the 2020 primaries, which will take place March 3.

The deadline for candidates to qualify in Friday, Nov. 8.

“While this current disagreement is difficult, we don’t [stop doing] our jobs because of conflict,” Young said. “In that spirit, the DCDEC is currently qualifying candidates for county offices.”

To Young, the stakes couldn’t be higher for Democrats across the nation in 2020.

“The year 2020 is very important,” Young said. “Alabamians will vote in state and primary elections [in] March of 2020 and in the General Election in November of 2020 for President of the United States and other offices.”

“All Democrats are invited to attend our meetings,” Young said. “We still have vacancies an d are looking for Democrats who want to be active with the party.”

For more information on the party or how to get involved, call 334-419-5158, visit dallascountydemocrats.org or connect on social media.