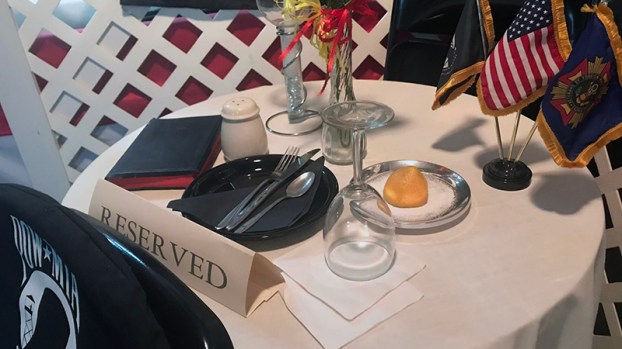 VFW sets table for one

The joviality of the crowd at the Veterans of Foreign Wars (VFW) Post 3016 headquarters Saturday contrasted sharply with the somber reason for the gathering – the third Friday in September is designated as Prisoner of War (POW)/Missing in Action (MIA) Day and the local VFW hosts a ceremony each year to pay homage to those who never came home.

People sipped beers and laughed, others played rounds of pool, as the brightly lit jukebox rattled out Lynrd Skynrd tunes – all around were tables adorned with black table cloths, black roses in small metal cups decorated with skills and black balloons tied to every chair.

It’s hard to know whether the black decor was for the solemn ceremony to remember “fallen comrades” or the unexpected birthday party that had to be put on hold for a few minutes while VFW Post 3016 Commander Dennis Doherty gave a few remarks for the ceremony – either case would have been reasonable.

“This gives us the opportunity every to keep the POWs and MIAs in the forefront,” Doherty said before the ceremony. “If we don’t do this, the spotlight would be lost.”

Patsy Stone, a former Auxiliary President and current Secretary for VFW Post 3016, who does most of the heavy-lifting related to holding the event each year, agreed.

“I’ve just took this under my wing for the last couple of years,” Stone said of her role as organizer for the event. “People just forget – they forget the importance of vets and what they do for our country.”

Stone is surrounded by veterans – her husband, Rod, served in Vietnam and his father served in World War II; they have a son who served in The Gulf.

The ceremony consisted of Doherty explaining the symbolism behind a variety of objects placed atop the table for one meant to recognize those who have been taken prisoner or whose whereabouts remain unknown – there are still more than 80,000 soldiers unaccounted for from World War I, World War II, the Vietnam War, the Korean War, the Cold War and the Gulf War and other conflicts.

As the ceremony began, veterans gathered around Doherty in the front of the room as he read aloud the significance of each item placed atop the ceremonial table – the small table symbolizes the frailty of one prisoner alone against the enemy; the white table cloth symbolizes the purity of the soldier’s intention; the rose symbolizes the blood shed on behalf of the nation; other items on the table included a lemon slice, a dash of salt, an inverted glass and more, each with a unique meaning.

As the brief ceremony came to an end, Doherty and the other veterans stood with their hands perched in front of their foreheads in a salute as “Taps” played softly.