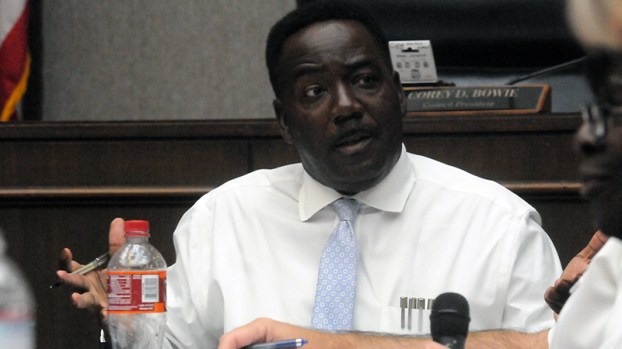 Before diving into the issues, Bowie provided those in attendance with a brief update – the three finalists for chief of the SFD have been chosen and will be presented to the council next week and a Business Watch meeting is slated to take place Sept. 30 at 6 p.m. in the George Evans Reception Hall.

Further, Bowie noted that the Selma City Council may opt to hold a budget hearing Monday, in place of its regularly scheduled work session, with a possible second hearing Wednesday.

First on the agenda was the budget for the court system, which Hagood stated overall was agreeable.

However, it was noted that there are magistrates, who act as judicial assistants at times and determine probable cause in various cases, making minimum wage.

Hagood noted that people in these positions have to attend school and earn a certification – generally, they are paid between $12 and $14 per hour.

Youngblood noted that such positions are important, as they make decisions that impact people’s lives each day, and they can only be expected to take the job as seriously as the city does.

“We can’t be paying these people in these positions minimum wage,” Youngblood said, noting that they could easily find a job with better pay and less responsibility.

Youngblood also voiced concern over the fact that funds for training and travel, which is required by the state for the local court system, were transferred from a judiciary account to the municipal court account.

“That leaves a lot of room for misunderstandings later on,” Youngblood said.

But Hagood had no issue with the change, noting that there was plenty for the department to attend its required training and that a singular account won’t pose any difficulty.

Graham noted that the budget represents a salary increase across the board for the department – firefighters currently make just over $28,000 annually and the budget calls for a roughly $2,000 boost – as well as an increase in allocations for equipment, as Graham stated that the department needs to upgrade its technology, replace a couple of vehicles and more.

However, Jackson notes that administrative assistants did not receive a raise in the budget, nor did the department’s fire investigators, which received a $15,000 bump in its line item previously.

Graham also stated his hope that the department can get back to 54 firefighters, its optimal level for operation.

Multiple efforts have been undertaken in the budget to bolster the work of the fire department, including an increase in funding on the vehicle line to repair the department’s dysfunctional ladder truck, additional funding for training and recruitment and an additional $20,000 for fire investigators’ equipment.

Plans are also being hatched to move the fire investigators into dual roles, including code enforcement.

As far as the SPD is concerned, Green states that the equipment line, currently at $30,000, needs to be closer to $40,000 to meet the department’s needs.

“People are hard to find nowadays,” Green said. “Things are just getting out of control in some parts of the country.”

Green also noted that the budget should be amended to reflect the decrease in the jail lease, which was recently dropped from $200,000 to $130,000.

Further, $1,500 has been allocated to pay the $50-per-additional-bed charge imposed by the jail, but Green stated that less would likely cover the cost.

Six vehicles are being leased at $41,000 per unit and an additional four are being purchased.

Youngblood voiced concern over funding for the animal shelter, stating that it shouldn’t be facing the problems it currently does, but such concerns could be addressed at a later date.

Sturdivant Hall readies for ‘BBQ on the Green’

It’s once again the time of year for Sturdivant Hall’s Annual BBQ on the Green. Each September, the board members... read more