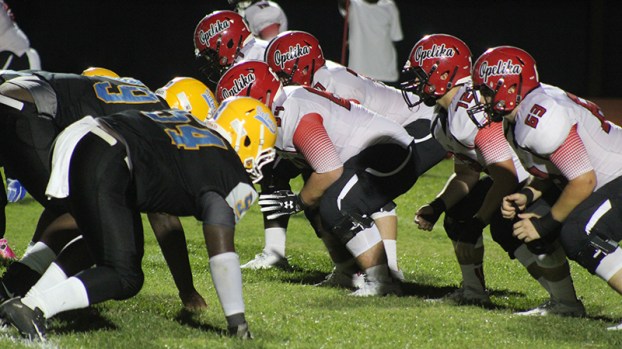 Though the Saints put up a tremendous effort on defense, they weren’t able to find their footing on the offensive side of the football, falling to the Bulldogs 23-0.

The Saints held off their attackers until 7:27 remained in the first quarter when the Bulldogs drew first blood thanks to a completed field goal from Senior Bulldog Kicker Marshall Meyers, 49.

The Bulldogs scored their first touchdown of the evening toward the end of the second quarter with 2:42 on the clock.

Junior Running Back Eric Watts, 37, carried the football into the end zone putting the Bulldogs up 10-0 over the Saints.

The Bulldogs put another couple of runs on the board during the second quarter with a touchdown at the 10:28 mark and another a few minutes later with 7:37 remaining.

The Bulldogs failed to complete the extra point on the second touchdown, leaving the score 23-0 at about the middle of the second quarter, where it remained until the clock ran out.

The Saints gave no quarter on the defensive side of the football during the second half of the game.

No matter what the Bulldog’s offense threw at them, the Saints fought them tooth and claw, stopping them from putting points on the board by any means necessary.

After the game clock struck zero Friday night, Selma High Coach Will Gandy bragged on his Defense after their performance against the Bulldogs.

“Really proud of the defense,” said Gandy. “I think the guys played a hell of a football game.”

Gandy did mention a few mistakes made in the first half he wants to iron out before next week’s showdown against Benjamin Russell Wildcats, but overall commended the Saints on a fight well fought.

“I’m really proud of the way they fought until the end against a really good football team,” he said.

The Keith High Bears are off to one of their best starts in years. The Bears put their unbeaten 2-0... read more