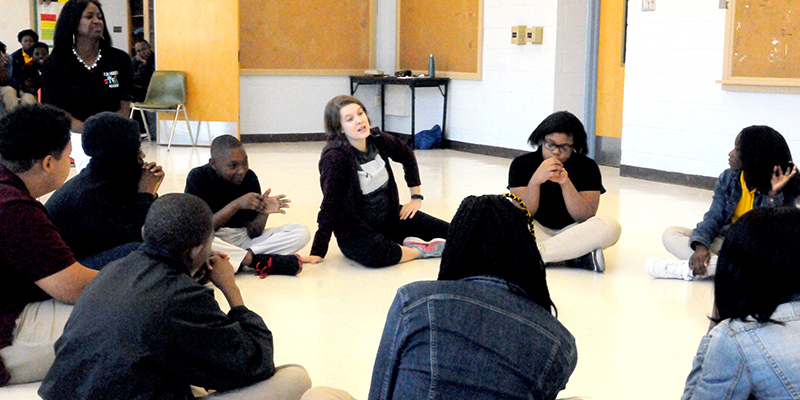 R.B. Hudson Middle School students began preparing for their end of the year performance of “The Lion King” with a workshop from the Alabama Shakespeare Festival team.

“It is a partnership between the Selma chapter of the Links, Inc. and R.B. Hudson STEAM Academy,” said Danielle Wooten, a member of the Selma chapter of the Links, Inc. and a member of the Selma City School Board of Education. “With the STEAM Academy in the arts department, they have dance, theater, visual arts, graphic arts, choir, band and fashion design. The program is going to be integrated. So, instead of each skill set standing alone it will be integrated and everyone will be working to the common goal of culminating ‘The Lion King.’ For example, the fashion design class will come up with the costumes and be able to see the costumes on stage. We also have a film director that is going to come and partner with us in October and will help them through that process. Today we have the Alabama Shakespeare Festival that is coming in to do the workshop with the theater department. We also have Alabama State University coming in to help with the music.”

Delaney Burlingame the education coordinator for the Alabama Shakespeare Festival led students in acting warm ups and delved deeper into acting skills they can use in their production.

“Today I have really been working on the building blocks of acting,” she said. “We just warmed up our voices, bodies and imaginations. We will go through some character exercises. We will move around the room and explore how different characters move. We will look at crossing a room in different emotions, scenarios and characters. We will do something called the emotion chair and that will help them embody different emotions when we act. We will do some setting work. We will do some frozen picture work particularly with things that have to do with ‘The Lion King’ and then we will end with talking about objective tactic obstacle work, which are the three most important things to think about when playing a character: what they want, what’s in their way and how they get around it.”