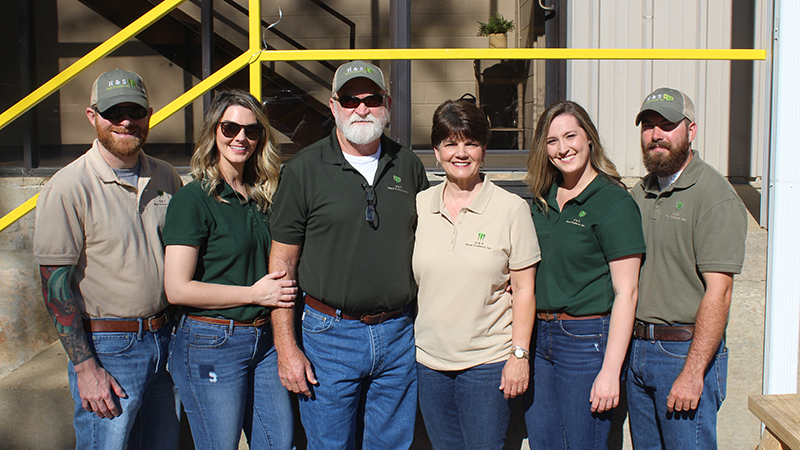 Selma and Dallas County Economic Development Authority (EDA) Executive Director Wayne Vardaman announced his excitement for Selma’s newest business during the opening remarks of the ceremony on Friday, stating that the company has tripled their projected employment and added to their capital investment.

According to H&S Wood Products Manager Jason Potvin, the company has 18 employees and is hiring more.

“We’ve been very blessed and fortunate to take on some business and we’ve just got to retain that and make sure we keep our word to our customers,” said Potvin. “That’s the main thing in the pallet business is that you always keep your word.”

H&S Wood Products purchased the large empty warehouse which was formerly owned by Kelley foods and the building now holds offices for the company as well as the manufacturing facility where the pallets are built to its customer specification in industries such as paper, beverage and cement.

During his remarks at the ceremony, Potvin shared how H&S Wood Products grew out of a friendship between he and H&S Owner Mike Hicks.

The two men pursued their own ventures for the next several years before having the vision to open H&S.

Potvin is a Selma native and Hicks, an avid hunter and outdoorsman, was already very familiar with the Selma – Dallas County area through hunting trips.

Hicks considered Mobile as the new spot for his next pallet venture, but Potvin suggested Selma, saying he could get the business started much quicker there.

“I said, ‘I’m already in Selma every weekend anyway,’ so we made it happen,” said Hicks.

Several elected officials were in attendance at Friday morning’s opening ceremony including Probate Judge Jimmy Nunn and Selma City Council Members Miah Jackson, Susan Youngblood and Carl Bowline. Selma Mayor Darrio Melton expressed his enthusiasm for the new business, after receiving a tour of the facility from Potvin and Vardaman.

“We’re putting people to work,” said Melton. “And it’s a great day any time we have people’s dreams in business coming to fruition. I’m very excited about it and I’m looking forward to helping other businesses come into this area and opening up.”