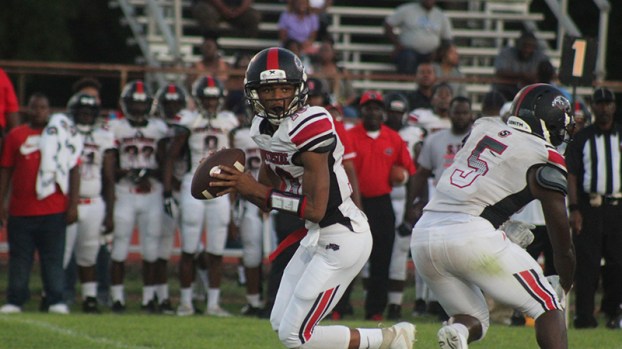 The biggest rivalry in Dallas County played out Friday at Memorial Field as the Selma High Saints triumphed over the Southside Panthers 28-20.

Both teams struggled to find their footing on offense during much of the first quarter, fighting it out until 5:44 remained when the Saints finally drew first blood thanks to a touchdown pass thrown by Sophomore Quarterback Keondre Pope, 3, to Senior Wide Receiver Gabe Wade, 1.

Senior Running Back Amarian Molette, 2, then ran the football into the end zone, completing the extra point attempt and beginning the Saint’s lead, 8-0.

The Saint’s put 14 more points on the board during the end of the second quarter thanks to a pass from Pope to Junior Wide Reciever JaVontae Stubbs, 16, with 3:58 left in the quarter.
The Saint’s failed to complete the extra point, but made up for it later with a 15-yard run into the end zone from Keldrick Carter, 15, followed by another completed 2 point conversion by Molette, putting the Saints up 22-0 at the end of the first half.

The second half of the game fared much better for the Panthers as they stopped the Saints on defense for the entire third quarter until the Panther offense put their first 6 points on the board thanks to a touchdown pass thrown by Sophomore Quarterback Christopher Thomas, 13, to fellow Sophomore Wide Receiver Mariyon Johnson, 4, 1:02 left in the quarter.

The rest of Friday night’s action all took place near the end of the fourth quarter beginning with the Panthers hitting their target yet again from a touchdown pass thrown by Thomas, this time to Senior Wide Receiver Earnest Hatcher, 6, before Jr. Wide Receiver Tiyon Fikes completed the extra point, bringing the Panthers a little closer to the Saints.

The Saints scored their final touchdown of the night with 25.3 seconds remaining in the fourth quarter thanks to a run from Senior Running Back Tre’Derion Phillips.

The Southside Panthers were able two score two more touchdowns thanks to opportunities seized by a recovered fumble and an interception during the last minute of the game, including two runs by both Johnson and Hatcher.

Though the Saints walked away with the win, Head Coach Will Gandy said he was disappointed in the way the team played.

The Panther’s head coach Charles Moody said he was proud of his team’s effort during the second half and thought the players adjusted well.

“I’m extremely elated at our effort in the second half and our ability to stay persistent and not give up,” he said. “That’s the first element in a winner.”

Running back Quintavious Woods ran for over 120 yards and scored two touchdowns as Keith High beat Vincent 28-19 on... read more