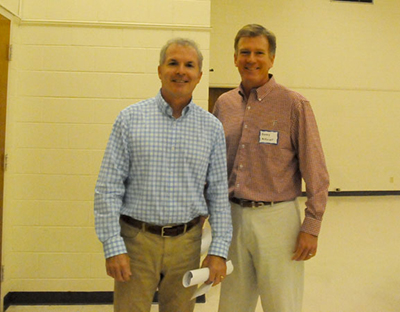 The Selma Quarterback Club welcomed its first guests of the 2019 season on Monday at the Selma Convention Center.

Barry McKnight and John Longshore, Co-hosts of the Budweiser SportsLine on SportsRadio 740 AM in Montgomery, addressed the group mixed mostly with Alabama and Auburn supporters

Longshore and McKnight both predicted how the Crimson Tide and Tigers would fare this season. Longshore is also a sports analyst for the Alabama News Network.

McKnight’s prediction on the Crimson Tide and Tigers is similar to Longshore’s projection.

“I like Auburn, but the two questions I have about them is the schedule and depth at wide receiver,”  McKnight said. “This may be Alabama’s most talented offensive team and that’s saying a lot. I think Alabama wins the SEC West and play Georgia in the SEC title game. I think Alabama and Georgia will be undefeated in the regular season. I think they can both make the college football playoff.”

The next Selma QB meeting will be held Sept. 9 with Auburn Athletic Director Allen Greene being the guest speaker.