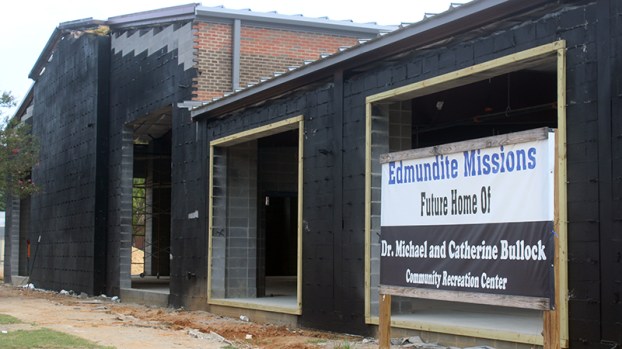 Where once there was an empty lot covered in red clay soil, there is now the skeleton of a building that will become the Edmundite Missions’ Dr. Michael and Catherine Bullock Community Recreation Center.

Workers have been on the scene continuously since the Missions launched the project late last year, starting with the demolition of its old administrative building.

Edmundite Missions President and CEO Chad McEachern said the group wanted to put the new community center on Broad Street as a “lasting symbol of the Missions commitment and resolve to serve those entrusted” to its care.

“I was reminded today that we are only 85 days out from the beginning of construction,” McEachern said Monday. “Considering that, I am blown away by how the project has moved along in spite of early challenges. This center has been a vision of mine and the Missions for such a long time and I can’t describe my excitement to see the building coming to life.”

McEachern said the Missions began working with architects and contractors long before site work began, which he said was a “Lengthy process” due to the condition of the soil – after that, workers began pouring slab for the foundation, erecting the steel frame and installing concrete masonry unity.

This past week work began on ductwork for the HVAC system, as well as the installation of electrical conduits and a fire suppression system.

Crews will begin lawing brick and starting the storefront frames this week, McEachern said, and the gaping square holes in the front of the building will soon become “huge windows creating wonderful natural light within the center.”

“My hope is that these windows create a greater sense of connectedness in the community, whether it is a passerby or someone enjoying activities within,” McEachern said.

Painting will also begin this week, while mechanical and electrical work will be ongoing.

“I’m excited about the progress that has been made and I’m excited to continue to watch it all come together over the next few months,” McEachern said.

The center, which is slated to be opened to the public by the end of the year, will feature a regulation-sized basketball court equipped with a projection screen and sound system to host a multitude of community events.

It will also house a state-of-the-art weight room, two multi-use classrooms, a computer lab and more.

McEachern said the project is significant for two main reasons – first, it is a reminder of the Missions’ commitment to the community and, second, it will serve as a “beacon of hope for a better future to all who fellowship within the center and the community as a whole.”

“I came to Selma over a decade ago to begin work with the Missions,” McEachern said. “Over this time, I have truly fallen in love with this city and specifically it’s people. I love working hard every day to carry on the legacy of the Society of St. Edmund: caring for those most in need. I’ve visited with thousands of those we serve in my time here. I’ve witnessed the children who have nowhere to go, watching them play in abandoned lots in the shadow of boarded up houses. I’ve seen the seniors, who are all too often forgotten, sitting alone in their homes longing for interaction. The Missions has recognized the need for a space like this for many years and I am elated to see the dream coming to life. The doors opening will be a milestone I hope the community and I will never forget.”

Selma comes to life in Monopoly-style board game

On the end of an aisle toward the back of Selma’s Walmart, beyond the aisles packed with back-to-school supplies and... read more