Why I Love Selma – Brendan O’Connor 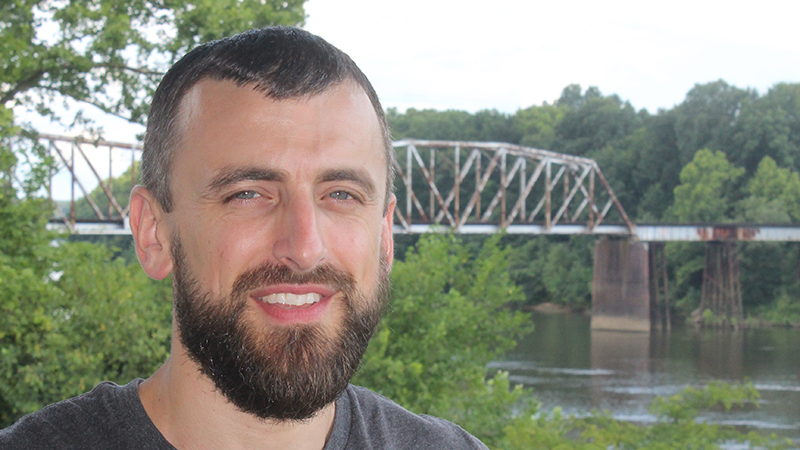 For Brendan O’Connor, Senior Organizer and Grant Writer for the Selma Center for Nonviolence, Truth and Reconciliation (CNTR), the road to Selma was indirect and convoluted, resting solely on a chance meeting with a local, community activist at an event in Nashville, Tennessee.

O’Connor was living in Nashville at the time and met Ainka Jackson, Executive Director of the Selma CNTR, through a faith-based community organization the two were involved with – Jackson and her family invited him over for dinner one evening and began talking about opportunities in Selma and her plans to launch a community organization in the city.

“About five or seven visits and nine months later I somehow ended up here in the Spring of 2016, O’Connor said.

At first he did grant writing work for the Selma CNTR on the side while he was working as a cook in the St. James Hotel kitchen, but O’Connor eventually moved over to Wallace Community College – Selma (WCCS) where he worked in the university’s Ready to Work program before taking on the Selma CNTR gig full time.

Today, O’Connor lives with his fiance in the Old Town area of town and the two enjoy walking their dog through the neighborhood and perusing the nearby gardens, a respite O’Connor says is needed after the hectic days spent at the Selma CNTR.

While the history of the town speaks to him, O’Connor says it’s the small-town way of life that makes him feel most at home in Selma – a native of a tiny town in Virginia in the Shenandoah Valley, O’Connor believes the cadence of small-town life is endearing and only complimented by the historic grandeur of the town.

“The size feels familiar, the small-town hardware stores and the rhythm of life feel familiar, too,” O’Connor said. “But the history, both the Civil War and Civil Rights, gives a gravitas to how we do community here, how we live with each other.”

That “gravitas” is not without its drawbacks, O’Connor asserts, as the push and pull between past, present and future can put a small Southern town under a national microscope, magnifying all of its shortcomings in a frustrating way.

“Many of those dynamics are at play all around the country too, so some of that just isn’t fair, you could say, but it also seems like an opportunity to be about the future,” O’Connor said. “The late Vincent Harding, one of Dr. [Martin Luther] King’s speechwriters, put it well a few years ago when he said about the U.S. that ‘when it comes to creating a multiracial, multiethnic, multireligious, democratic society, we are still a developing nation. We’ve only been really thinking about this for about half a century.’ I think the magnifying glass on Selma is annoying too, but at the same time it can needle us to contribute to what Harding also mentioned: the idea of what constitutes a beloved community, as well as what constitutes what he called a ‘beloved nation.’”

For his part, O’Connor is working daily to try to create the “beloved community” he believes Selma and her people are due through his myriad of community-based efforts in his role at the Selma CNTR, though the work can often stick its nails into other pieces of life.

“I have the blessing and the curse of a job that is seeking to do community-based work,” O’Connor said. “I’m being a little tongue-and-cheek, but it ends up taking up my work life at the same time it leads to various volunteer-type of opportunities, too—and [it] can leave me a little burnt out when it comes to volunteering. Don’t get me wrong, I try to stay open to chances to do that too, I just have to watch myself because I’m in one of those burnout fields.”

Despite that, O’Connor busies himself with playing music at home most evenings or wandering down to Play Selma for jam sessions or uniting folks over dinner and entertainment  – he recently completed the Leadership Selma program and has co-founded the Local Restaurant Cooperative, which is launching its Sunday “Rotating Chef and a Show” series July 28 and can be found online at www.facebook.com/TheLocalSelma.