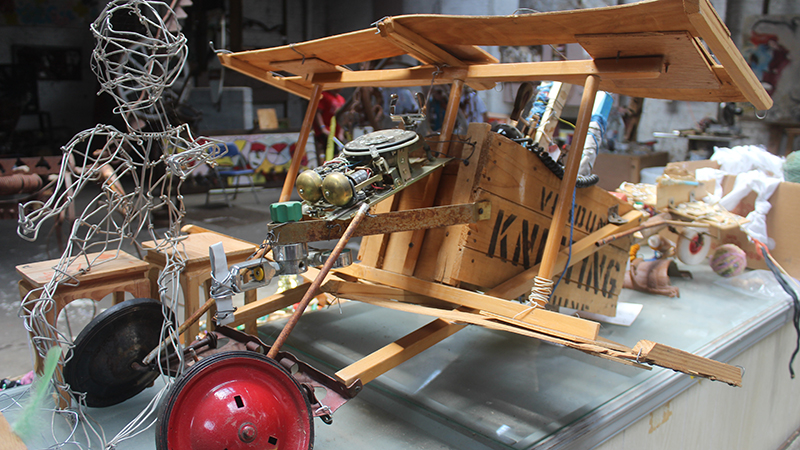 Selma City Ceramics Summer Art Program has been one of the most anticipated summer activities in Selma since its inception over 25 years ago.

The program has hosted two camps per summer (except for the summer it hosted 3) every year for 26 years for a total of 53 camps.

The program was started all those years ago by Candi Duncan, A.C. Reeves and colleagues of Duncan’s at the Selma City Ceramics program.

Over the years, the instructors of the program have developed an incredibly efficient system for keeping the camp running smoothly.

“Over the years, you learn what works and what doesn’t,” said Duncan. “We’re really meticulous on scheduling because we know that’s the key to it. We have seven groups with seven projects each day and we rotate the children approximately every 30 minutes and that gives them the opportunity to experience a lot of different things that might interest them, and if they aren’t interested, at least they’re moving on really quickly.”

There’s a carefully color coded chart with each activity neatly arranged under its corresponding time slot in Duncan’s office. The chart dictates the day as the children move from one activity to the other, experiencing a literal gallery of different mediums of art and expression.

All of those different projects mentioned by Duncan are part of the reason kids keep coming back.

All of the different mediums, like sculpture, paint, macramé. Origami, calligraphy, weaving, sewing and ceramics, just to name a few, allow children to discover their passion and figure out which form of expression best suits them.

With all those forms of art to choose from you would think some of them would fall to the bottom of the list in favor of others, but Duncan says that isn’t so.
“We can’t seem to do anything that they really hate,” she says. “And I think the reason that is that a lot of them just really enjoy being here and having somebody take time and do something with them. You take something as simple as a paper project with colored construction paper and Charlie Lucas showing them how to build something with wire and the love them both equally.

Lucas, whose studio on Lauderdale Street has served as the camp since the camp’s former home at Dallas Academy caught fire in 2017, serves as one of the camp’s many talented instructors.

A prolific artist in his own right, Lucas feeds off of the energy and creativity of the young artists that overrun his studio during the time the art camp is in session.

During this year’s camp, Lucas has his young artist build a sculpture of an enormous fish.  Under Lucas’s guidance the children created a one of a kind piece made up of nearly every usable material imaginable including sticks, cloth, wire, scraps of metal and even computer parts.

As Lucas watched the children assemble the creature, he began to feel the same way he does when he builds his own sculptures.

“His face just lit up,” he said, reminiscing about a child placing an important piece on the sculpture earlier in the day. “He was seeing what was in his head come to life. It’s a magical thing to see happen.”

According to Duncan, “magical” experiences like the ones that Lucas spoke of keep kids coming back for more than one camp.

“Some of them enroll when they’re eight and they don’t stop coming until they can drive a car,” said Duncan.

In fact, some of the kids who grow up attending the art camp return one day as instructors.

One such case is Liz Brown, who has actually been an instructor longer than she was a camper.

According to Brown, she became an instructor when she was only 11 and has continued to help with the camp for the past 10 years.

“I went to camp as a camper one week and came back the next as an instructor,” she said.

Brown feels like the art camp experience is one she just can’t get away from, returning year after year.

“I wouldn’t miss it for the world. I come back as many times as I can. Every year. I just love working with the kids and the instructors are amazing. It’s not just people that worked for the city, it’s local artists, like Charlie teaching these kids. They get just as excited as the kids do.”

Duncan believes all of that excitement is good for the children. Due to lack of funding, many area schools no longer have art programs and the Selma City Ceramics Summer Art Program is the only opportunity that kids get to be in an artistic classroom-type environment.

“You just see the little lightbulbs go off in their heads,” said Duncan. “It’s wonderful.”