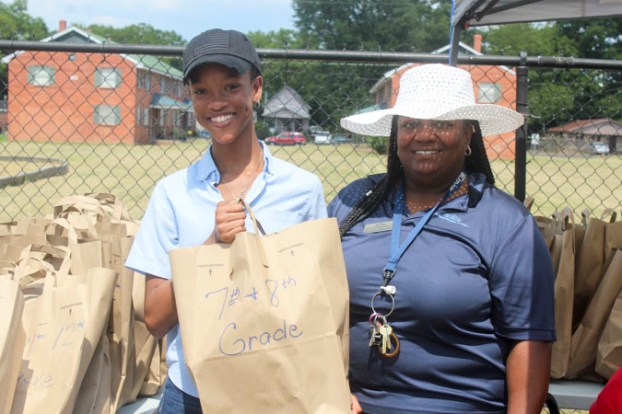 The Selma Housing Authority held a Back to School Fest at GWC homes on Wednesday afternoon.

School supplies were given to the students, ranging from elementary to high school. Free haircuts were also provided by TeamWork Barber Shop. Public schools in Dallas County start Monday.

Music, food and a bouncy house were all provided at the three-hour event. The event was held for all four of the SHA housing areas: GWC, Valley Creek, Rangedale and Phyllis Heights.

“It was very important to do the back to school bash because we wanted GWC residents to know that the Selma Housing Authority cares about them,” SHA Housing Director Kennard Randolph said. “It will help the parents out a little bit and give the kids a jumpstart on the school year.”

“You have to invest in the people so they can invest in you,” Johnson said.

Bre’Anna Johnson, an eighth-grader at RB Hudson Middle School, said she enjoyed volunteering for the event.

“It’s a lot of fun to be out here helping out,” Johnson said. “I’m ready for school to start.”

“It’s rewarding to help out with the children,” Harrison said.