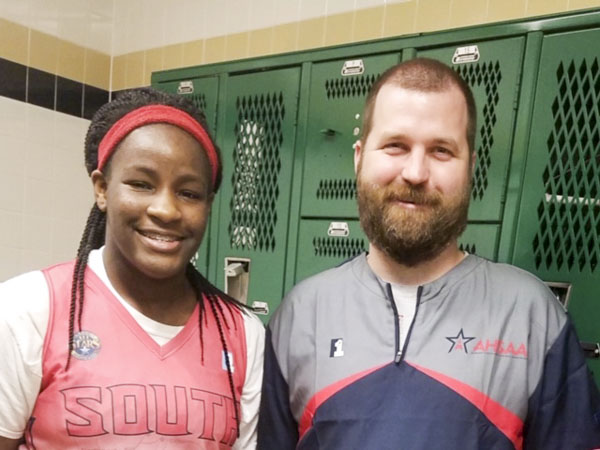 Brown did not score, but grabbed six rebounds in the contest.  She said it was a great opportunity playing with players from other parts of the state.

“It was a nice experience playing with other people because the other players are so good,” Brown said.

The 5-foot-10 Brown said her defensive skill showed in the All-Star game.

“Defense is the key to winning games,” Brown said. “It’s how you win games.”

Brown, who averaged 15 points and 10 rebounds a game and earned The Selma Times-Journal’s All Dallas County team honor, said  the game didn’t feel different with Smith as a co-coach.

“It felt like it was a Southside game because coach Smith was on the sidelines telling me what to do,” Brown joked.

“It was an honor and blessing to have the opportunity to coach in the All-Star game,” Smith said. “The ability to make connections and learn from other coaches was invaluable.

“I hope to utilize the lessons I learned to improve Southside’s basketball program. It was an added bonus to work with two great representatives of our community, Kylan Brown and Rodericka Parker of Selma High. I hope Kylan can take this experience, grow from it and shared what she learned with her teammates.”

Brown said she saw the opportunity to improve her skills, especially on the offensive end. She also made the Dallas County Schools All-Tournament and Area 6, 3A teams.

Helping Southside High take the next step is important for Brown, who has a 3.8 GPA.   “Southside is going to have a great year,” Brown said. “I feel that this will be my year.”