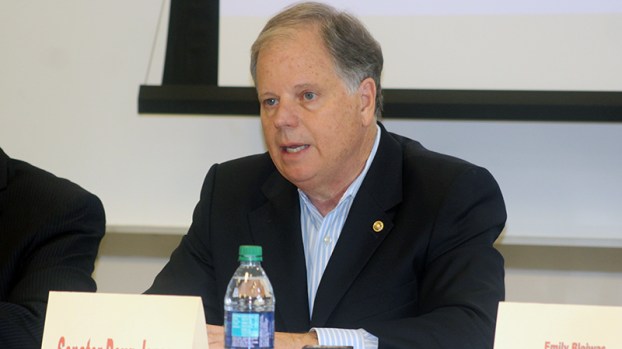 Jones: Alabama healthcare is in a ‘crisis’

On Friday, U.S. Sen. Doug Jones, D-AL, hosted a healthcare forum at Wallace Community College – Selma (WCCS), in which he updated those in attendance of his ongoing efforts to expand access to the healthcare in Alabama and hear from a panel of rural healthcare providers on the difficulties they face in serving their communities.

“We have common challenges all over this state,” Jones said at the beginning of the forum, noting that the problem is particularly acute in rural areas, which have seen a slate of hospital closures over the last few years.

Before Jones launched into a discussion about his efforts in Washington, the panelists gathered around him spoke briefly about their work.

Vaughan Regional Medical Center (VRMC) CEO David McCormack began his remarks by thanking Jones and U.S. Rep. Terri Sewell, D-AL, for their work in tackling the Medicare reimbursement rate, which he said is the lowest in the nation.

McCormack said that Jones and Sewell appear to be the only Alabama representatives in Washington interested in taking on the myriad of problems facing the Alabama healthcare system, adding his hope that other Alabama lawmakers would get on board.

Dr. Jeffrey Ford of the Selma Rural Health Clinic noted that his organization is looking to expand into Perry County and applauded Jones representing the needs of rural health in the Senate and addressing what he called the “rural healthcare crisis in the state.”

Also on hand was Dr. Nancy Merner, a researcher focused on genetics, who moved from Canada to Alabama and quickly recognized the differences between the two healthcare systems.

“My heart hurts when I see all the disparities,” Merner said.

Dr. Charles Lett, a Selma native and general surgeon of 40 years, talked about the “great disparity” in healthcare along racial and economic lines that has plagued local residents for years, noting that, in terms of median income, Selma is among the lowest in the state.

After the brief introductions, Jones stated he, along with Sewell, has been “pretty active” in building access to healthcare.

“It is a crisis,” Jones said, noting that 13 hospitals have closed in Alabama over the last several years and seve of those were located in rural areas.

Jones discussed his effort to increase Alabama’s Medicare reimbursement rate, which he said sits at roughly 67-cents on the dollar compared to some states that see the entire cost reimbursed.

“Over the years, our delegation has been supportive of raising that index,” Jones said, adding that being supportive wasn’t enough and he and Sewell, alongside U.S. Sen. Richard Shelby, R-AL, opted to be “aggressive” in pushing for the change.

Earlier this year, Jones met with leaders from the Center for Medicare and Medicaid Services (CMS) to talk about the unfair reimbursement rate and was inspired to find that the department was already aware of the issue and looking into it – a little while later, Jones was informed that the department had developed a three-year plan that will bring Alabama more in line with other states beginning in October, a change that could mean “hundreds of millions of dollars” for Alabama hospitals.

“I feel very good that they’re going to raise those rates,” Jones said.

Jones again asserted his support for expanding Medicaid in the state, noting that around 300,000 additional Alabamians would gain coverage under the expansion and a significant economic impact, around $2 billion, would be felt as a result.

Additionally, Jones discussed the Maternal Health Accountability Act, which he introduced as a way of tackling the maternal and infant mortality rate that is especially bad in Alabama.

“We have a huge problem in Alabama with infant mortality,” Jones said. “We have a big problem with maternal mortality.”

Jones also discussed a bill he has introduced that would allow mothers to stay on Medicaid for up to one year after having a child, which would be paid for by increasing the cigarette tax and closing loopholes related to tobacco regulation, as well as his efforts to address health disparities prevalent among women and children of color and his work to bolster the number of nurses and doctors working in rural areas.

Jones said a bill would soon be coming forward to address high drug prices, but added that his biggest concern right now is the ongoing lawsuit aimed at dismantling the federal healthcare law, the Affordable Care Act (ACA), saying that undoing the law would cause “chaos.”

“To completely throw the ACA out is going to cause a lot of chaos,” Jones said before asking the doctors on the panel to discuss the issues they see facing rural healthcare and patients.

Lett discussed an issue that would be at the center of the day’s discussion – educating people on how to care for themselves and what services and programs are available in their areas, noting that “morbid conditions,” such as hypertension and diabetes, create a “revolving door of admissions.”

“The emphasis of healthcare on the education side is a problem,” Lett said. “We just need to keep the issues before the people.”

Dr. Thomas Broughton of the Camden Rural Health Clinic talked about his excitement about having a Senator in office that would listen to the needs of the people, but emphasized that listening is not the only need currently, noting that access to insurance, transportation and education is often the biggest hurdle for rural patients.

Broughton also noted that a big problem for rural hospitals is the misperception among the community that hospitals in larger cities offer better services.

Ford noted that the specter of the Tuskegee Study, which looked at untreated syphillis in African-American men and failed to provide treatment for its subjects, resulting in the death of numerous men and causing at least 40 women to contract the disease and 19 children to be born with it, still permeates the consciousness of rural, minority patients who are slow to seek help, which often leads to problems that could have been resolved years prior.

“Give us a try,” Ford said. “Don’t look at the rural, small clinics as the last place. We can do a lot of things through rural health.”

Doug Brewer of Bryan Whitefield Hospital added that the “regulatory environment” surrounding hospitals often makes it difficult for them to help patients access the care they need, particularly if the patient is low-income and must travel for treatment.

“The problem is the complexity of it for the hospitals,” Brewer said, noting that hospitals once provided car seats to new mothers, but a law stating that any gift over $8 is essentially considered a bribe put an end to that. “Even if we want to help, we can’t. Our hands are tied.”

“We all battle that and it hurts us,” McCormack said. “People don’t care, unfortunately, about healthcare until they need it.”

McCormack also advocated for the expansion of Medicaid, saying that the $2 billion economic impact that the state would enjoy would be much larger than the one experienced by recruiting Airbus to the state, for which Alabama gave away millions in incentives.

“People are flooding our emergency rooms and it’s a crisis,” McCormack said. “The cost of that crisis is so much more than regular care.”

McCormack also stated that in some states that have expanded Medicaid, the prison population has decreased by nearly 40 percent as people are able to address long-standing mental health issues.

Other rural healthcare providers expressed much the same sentiment and echoed Merner’s assertion that doctors and nurses and providers need to go into the communities they serve and educate the public both on what is available to them in their local hospitals and clinics, as well as what they can be doing at home to live a healthier life.

In conclusion, Jones noted that there seems to be a bipartisan push, backed by U.S. President Donald Trump, to address the issue of high prescription drug costs through transparency, among other efforts.

“There are some things that are in the works now and there are some smaller things,” Jones said, noting that there is a push to get generic drugs to market faster and allowing Medicare to negotiate drug prices with pharmaceutical companies, as for-profit insurance providers are currently able to do. “We’re coming at it from a different angle. It won’t be over night.”

Jones also asserted that Alabama should invest in healthcare as much as it does business, saying that such an investment is an investment in the people.

Residents of the Selma – Dallas County area will have a unique opportunity to both have a good time on... read more