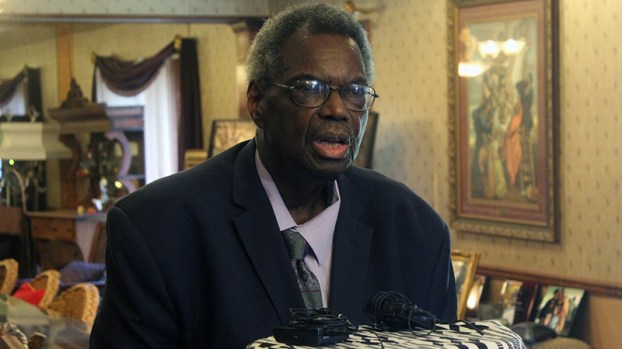 “I don’t file lawsuits lightly,” Sander said. “This is a persecution.”

Sanders said that Toure had originally taken issue with campaign signs placed around the city prior to last year’s election – Sanders said the signs were posted in violation of a City of Selma ordinance, which bars the posting of such signs on public right of ways.

Sanders said that Toure brought her concerns to the city’s attention and vowed to remove the offending signage if the city didn’t take action.

According to Sanders, an undercover cop was enlisted to track Toure in the event that she made good on her promise.

“Toure was arrested with her hands cuffed behind her back at length hurting her wrist, which had been broken,” a press release from Sanders’ office said. “Police left her 12-year-old granddaughter on the streets by herself, refusing to allow Toure to call her granddaughter’s parents.”

During the press conference, Sanders claimed that SPD officers refused to allow Toure to call a bail bondsman and demanded a cash bond – Toure refused and spent the next two days in jail.

Along with Toure’s treatment, Sanders is taking issue with the fact that, nearly a year later, there has still not been a trial.

In the press release, Sanders also stated that Toure has been denied access to videos and other evidence related to the case.

Sanders further alleged that anonymous sources sent the arrest information to the Alabama Bar Association in an effort to damage Toure’s professional reputation.

“This is an abuse of the legal process,” Sanders said. “I’m sick and tired of not being able to get a trial. We didn’t have any choice but to file a lawsuit and try to bring this to a head.”

Sanders said Collier’s imminent departure from the SPD bears no weight on his decision.

Sanders accused Collier of lying about “any number of things,” including the rate of speed at which Toure was traveling during the time of her arrest, and said the incident is “personal.”

The lawsuit, filed in Dallas County Circuit Court, as Sanders claims that he has been unable to gain traction in city court, is seeking “judgment against all defendants” in the amount of $1 million for compensatory damages and $3 million in punitive damages.

“We intend to push it just as hard as we can and as fast as we can,” Sanders said.

Despite his outrage, Sanders is not unwilling to speak with those at the center of the allegations.

“I’m still willing to talk to anybody,” Sanders said. “I hope somebody will show good sense and stop this persecution.”