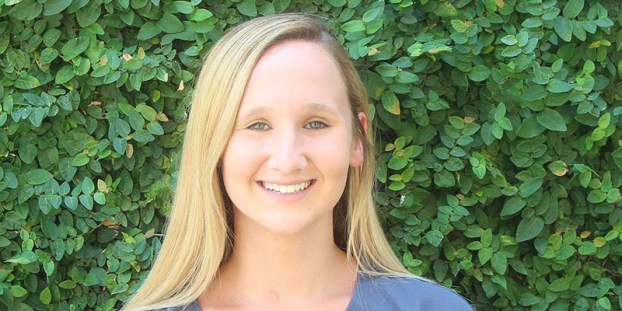 Being number one in her class is something Verhoff has pursued diligently for quite some time.

“Sixth-grade year I got named Salutatorian,” said Verhoff, “I’m a competitor. I play all sports. My competitive side came out and I was super upset I didn’t get Valedictorian. I vowed I was going to be Valedictorian by the time I got to 12th grade graduation.”

Alyssa’s mother, Denise, wasn’t surprised to learn the news either.

“She wouldn’t even miss a day if she was sick,” she said. “As much I wanted her to.”

Denise said that Alyssa has always been very strong-willed and determined.

“She works hard. She won’t listen to me,” she said, “She always does her thing and it’s always the right thing.”

Alyssa was instilled with a strong work ethic working in her parent’s stores. Denise and her husband, Dennis, own and operate Nappa Auto Parts stores in Selma, Uniontown and Marion.

That work ethic has helped her not only academically, but athletically as well. Verhoff was named MVP for the girls’ softball, basketball and volleyball teams.

This fall, Verhoff would like to play both softball and volleyball for the University of West Alabama where she plans to major in computer mathematics.

Verhoff’s love of computers began during her sophomore year. A teacher steered her into the direction of web design and she immediately fell in love with the feeling of satisfaction attained from successfully designing a page.

“I just love the problem-solving aspect of it,” said Verhoff.

Verhoff attributes her success as both an academic and an athlete to her organizational skills and sense of perfectionism.

Friday morning at 11 a.m. the lawn at the Center of Hope will once again be transformed into an old-fashioned... read more