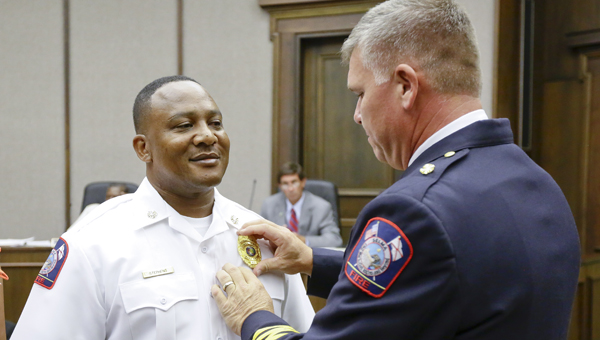 Stephens announced his resignation Thursday via a short letter, which stated only the following:

“Effective today, I would like to inform you of my resignation. I would like to be placed on leave time to exhaust my vacation, sick and comp time. I will send you another letter with the exact date of departure.”

For the time being, Chris Graham will serve as Acting Chief of the SFD until the council can decide on a permanent replacement for Stephens.

“That’s one of the appointment powers of the council,” Bowie said of the SFD’s top post. “There are some things we’re going to have to look at.”

Bowie stated that he had no further details on Stephens’ departure, but noted that the former chief has requested to appear before the full council in the coming weeks.

“It happened so suddenly,” Bowie said. “I thought the chief was doing a great job.”

Over the past several weeks, Stephens has gone before the city council to voice frustration over a lack of equipment and resources that had long been promised to the local fire team.

Though there is currently no timeline for when a full-time replacement will be named, Bowie believes the council should act fast.

“I don’t know one way or the other,” Bowie said. “That’s why it’s so important that we get together as a council.”

Bowie said the council may have to call a special meeting to deal with the issue, which he thinks would be best handled by instituting an interview process for any potential candidates.

Stephens, who began fighting fires at the age of 18, took the reins of the SFD in September 2018 after retiring as a captain with the Montgomery Fire Department, where he had worked from 1990 until 2010.

Stephens worked four years in the SFD before being named to the top post.

“This moment right here is actually the destination that I have desired for the past 25 years to reach,” Stephens said when he was anointed the new SFD Chief in August 2015. “I first originally came and just wanted to be a firefighter and sit back and just kind of do what firemen do…but after being here for a short period of time I realized I had a few things I could contribute to the fire service and that is what made me decide to get back within the promotional rank.”

“I just don’t know,” said Terry Ward, when asked how his family would survive if he had to go another... read more