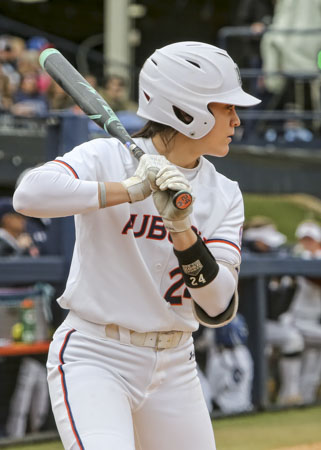 Kendall Veach’s road to becoming one of the SEC’s top softball players at Auburn University began in her backyard in Selma.

Veach’s father, Donald Veach, saw something special in her at the age of five. He recalls her corralling ground balls from every direction and being able to slap a ball with ease.

“I saw it very early, especially in her arm,” Donald Veach said. “She was able to throw the ball at five years old and I didn’t see that in other girls her age. Her hand coordination skill set her apart.”

Deborah Veach, however, had other ideas for her youngest child.

“I was a cheerleader at Wallace Community College and I wanted Kendall to be like me,” Deborah Veach recalls. “My dream of her being a cheerleader was gone after seeing her play softball. Donnie coached Kendall for the most part of her younger years and he doesn’t give himself enough credit for developing her into the player she is today.”

Kendall said the early coaching lessons from her father set the stage for her future success.

“My dad has taught me pretty much everything I know today,” Kendall said. “I can always count on him to tell it to me straight when I’m not performing my best on the field. My dad worked with me every day outside on the tee when I got home from school and practice. Even through the rough patches where I wanted to give up on this sport completely, he wouldn’t let me. And I am forever grateful he pushed me as hard as I did. Thank you, dad.”

Veach, a member of the All-SEC academic team, said her mother provided much-needed wisdom whenever she hit a rough patch on the diamond.
“My mom was always my go to when anything in my life got hard,” Kendall said. “Which most the time was softball because that’s pretty much my entire life. Since I was 7 years old and today, she still tells me the same quote before each game, ‘stay strong, play hard, and

never give up.’  Her telling me that each day is something that has kept me going all these years during a game that consist of mostly failure.”

Hunter Veach spent two years as an assistant coach at Auburn and worked with his younger sister. He’s now the head coach of the Beijing Eagles of the National Pro Fastpitch league, which is the team that selected Kendall seventh overall in the recent professional softball draft.

Hunter Veach, a 2012 graduate of Morgan Academy, wrote a draft night letter to his sister after the selection was made, telling her she inspires him.

“Watching you play and grow as a player is more of a gift than what I can give to you,” Hunter Veach wrote. “But this means everything. The reason I’m in softball is because of you. Being able to coach you when you were young is what got me into coaching. Being able to give back to you and have you give me something is everything. Two of the greatest years in my coaching career were at Auburn with you and being able to have you two more means the world to me.”

Kendall said she didn’t know what to expect as a player when her older brother was an Auburn assistant coach.

“Growing up being so close in age we were always a pain in the other’s butt,” Kendall said. “As we matured, we have become best friends with the help of softball bringing us together. The bond me and my brother built was incredible. He became not only my best friend but my mentor, life coach, mechanic when I had car troubles, the bank when I spent all my money shopping, my personal BP thrower and my right hand for anything I needed. Hunter, thank you for always having my back through everything. I cannot wait to be back together on the diamond and live out the dream being in the Pros.’’

When Kendall was a seventh-grader at Martin Middle School in 2010, then-Dallas County High School softball coach Ed Miller put her on the varsity squad. Miller was impressed with Veach’s work ethic and commitment to excellence as the Lady Hornets’ catcher.

“I remembered how hard she worked and how smart she is,” Miller said. “She was always looking ahead. At the plate, she was a great hitter.”

Kendall said playing at Dallas County was the turning point in her career. As an eighth-grader in 2011, she hit a two-run homer in extra innings as the Lady Hornets won the Class 4A state title.

“Coach Ed Miller gave me that opportunity, and this was the point in my life where I realized my potential in this sport,” Kendall said. “I was the catcher for my team catching Cassie Daniels and I was terrified. Cassie was pitching me an 80-mph fastball that I couldn’t even see. She taught me how to be a good catcher.”

Miller later became softball coach at Morgan Academy and Kendall transferred to the school. Her development continued under Miller and assistant coach Pee Wee Newman and it eventually led to a Division I scholarship at Auburn.

“Coach Miller and Coach Pee Wee believed I had what it took to play Division I at a young age when most didn’t,” Kendall said. “Through my high school career, they taught me how to mature as an athlete in this sport and how to compete each day. Through the tire pulling, hot practice days, and each successful season, I am truly grateful for both those men who had a huge role in the player and person I am today.”

“Kendall has amazing athleticism,” Dean said. “Her hitting has improved and she can play first base, catcher or third base. Kendall’s ability to play either position pushes the other players to show that they need to step up.”

Kendall said she’s gotten the most of her four-year Auburn career. She was a member of the Lady Tigers squad that finished runner-up in 2016.

“My career at Auburn has been one experience that I wouldn’t trade for anything,” she said. “Auburn is such a special place. Family is truly important here and I have made lasting

friendships that will continue after college.”

With all she has accomplished so far, Kendall still has several boxes to check off both on and off the field, including graduating next month with a Bachelor of Science degree in Exercise Science with a minor in Sports Coaching.

She’s also currently only three homers away from tying the school’s single-season mark. Her biggest goal on the diamond, however, is to lead Auburn to an SEC championship and a national title. That journey for Kendall and her teammates begins May 8 with the SEC tournament in College Station, Texas.