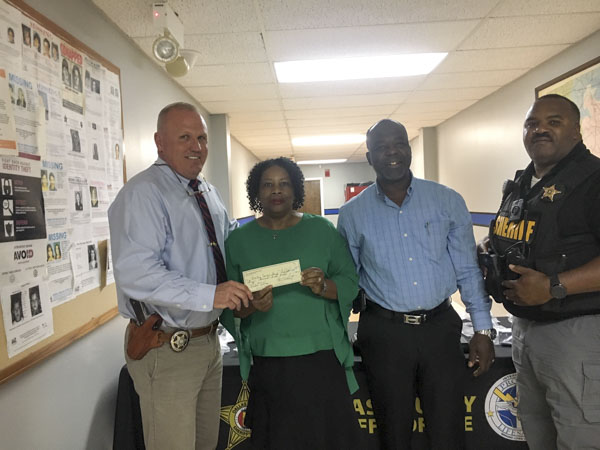 The Dallas County Sheriff’s Office (DCSO) received a donation from the city of Orrville Tuesday to purchase two radars on its cars.

“I’m excited that mayor Lumpkin saw the need to step up our patrol in Orrville,” Granthum said.

Lumpkin said the radars will greatly decrease speeding in the Orrville city limits.

“I’m very excited about the new radars,” Lumpkin said. “Safety is my main concern for the city. Those radars will down traffic in the city and just outside the city limits.”

DCSO Chief John Hatfield said the department is grateful to Orrville for their donation to help reduce crime.

“The donation is absolutely beautiful and it gives us a way to protect the city,” Hatfield said. “We appreciate the mayor and her staff.”

William Lumpkin said discussions were underway for donations as early as 2017, when Harris Huffman was Sheriff.

“We had been talking about slowing down traffic  in Orrville for a while,” William Lumpkin said. “Now we’ll be able to slow down traffic and give people tickets.”

One of the radars will go on the car of DCSO Deputy Dewayne Sanders, who said he’s looking forward to it.

“The donations are a good thing for the department and Orrville,” Sanders said. “It will help slow down traffic.”

On Saturday, hundreds gathered at the Elk’s Lodge to celebrate the 100th birthday of life-long Selma resident Lillie Irby. The... read more