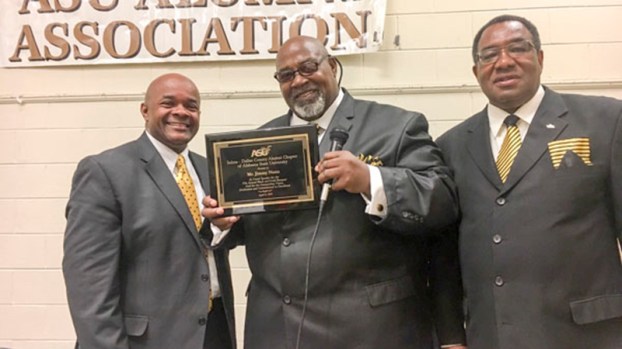 Nunn received a key to Dallas County by Dallas County Commissioner Curtis Williams and a plaque from ASU Alumni President Dr. Ronald Peoples. Williams graduated from ASU in 1974, People is a 1980 ASU graduate.

Nunn recalled growing up in Jemison, which he overcame speech difficulty as a child to eventually land scholarships to attend college. He graduated with a Math degree at ASU in 1992 and earned a law degree at Mississippi College three years later.

While Nunn is proud of his college education, he said a college diploma doesn’t define a person’s success.

“I’ve got degrees, but degrees doesn’t make life successful,” Nunn said. “You can be successful without a degree. You may decide to enter the armed forces, you may take your family business, you may start your own business.”

Nunn, a former City of Selma Attorney and Assistant Dallas County District Attorney, urged patience for those who attend college to allow themselves to grow during the process over time.

“Some may take a shorter route to reach their destination, others may take a longer route, just as long as you get there,” Nunn said.