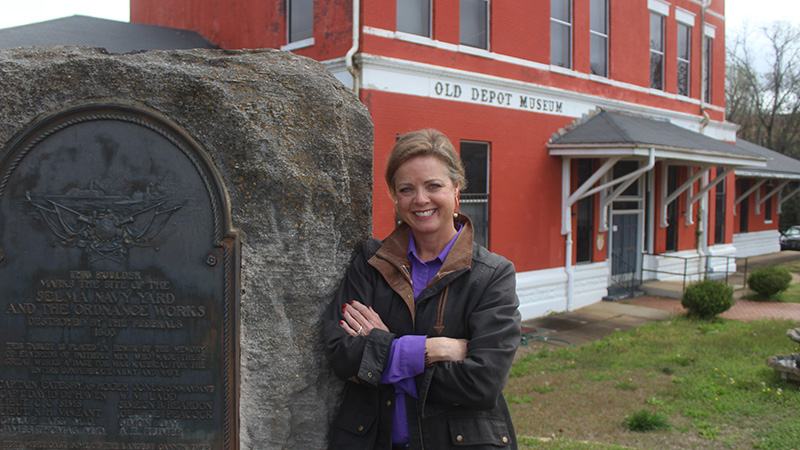 Beth Spivey’s love for Selma runs deep. Spivey grew up in the rural Lowndes County town of Petronia, but she spends most of her time in Queen City. She graduated from Morgan Academy in 1989.

Spivey just completed her sixth year as executive director and curator of the Old Depot Museum. She enjoys her role of giving tourists a positive first impression of Selma.

“I love it here,” Spivey said. “I love meeting people from all around the world. I love being able to give people a good first impression of Selma. I love showing people that it is a good town full of great people.”

Spivey said she enjoys seeing people across the world visiting Selma and dropping by the Old Depot Museum.

“We have people wanting to come to Selma and we have people who don’t want to live here,” Spivey said. “People from England are amazed at the land here. No one owns land in England. People from California love it here. I never knew that this many people love Selma. You get to meet many good people.”

“There’s so many wonderful things in here,” she said. “Selma is an important piece of American history. It’s not just about Civil Rights. We’re sitting on a gold mine.”

Working at Old Depot has provided a few learning experiences for Spivey. Historic items at the museum include a light green sweater worn by Martin Luther King Jr., drumsticks from Napoleon and a dish used to serve Marquis de Lafayette in Cahaba. Lafayette was a French aristocrat and military officer who served in the American Revolutionary War.

Spivey enjoys putting smiles on people’s faces at the museum.

“My favorite thing is when I help people find things they’re looking for,” Spivey said.

Spivey has traveled across the country over the years, including New York City and lived briefly in Mobile, but she loves Selma dearly.

“I love knowing everybody,” Spivey said. “I am very comfortable here. People trust me, that’s nice.”

Spivey would like to see Selma’s perception changed on the national scale.

“The world uses Selma for its own benefit and then forget about the city,” Spivey said.

Family is very important to Spivey. Her daughter, Mary Vincent Lewis, 17, will graduate from Morgan Academy this spring, with plans to attend Wallace Community College-Selma and become a nurse.