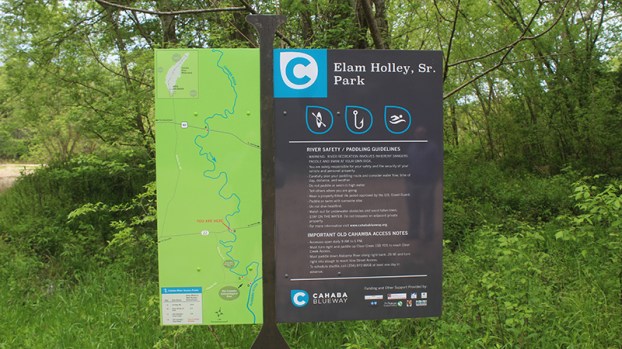 Over the past few years, The University of Alabama Center for Economic Development (UACED) has been improving access points along the Cahaba River as part of their Cahaba Blueway initiative.

Cahaba Blueway was enacted by UACED to make the Cahaba River more accessible and easily enjoyable for the community.

The latest improvement comes in the form of a new sign at Elam Holley, Sr. Park, the local access point where Highway 22 crosses the Cahaba on the way to Orrville.

The new sign at the park includes important information about the Cahaba River including how far away other access points are.

The grandson of Elam Holley, Sr., Alden Holley, says that his family is excited about the new sign at the park.

“Not just everyone has a park named after them,” said Holley.

Holley owns and operates Holley True Value in Selma. He began running the store after his father, Ralph, was in a car accident in 2009.

Holley’s grandfather moved to Selma from Perry County and started the business as a small office which then became a clothing store and then evolved into the hardware store that it is today.

“He passed away when I was five,” said Holley. “But from what I remember and from what everybody tells me we was good man.”

The land that is now the park was purchased from the Holley family by Dallas County many years ago and the park was named after Elam around 10 years ago.

“He’d probably think this was all a bit much,” Holley said. “He was a very humble man.”