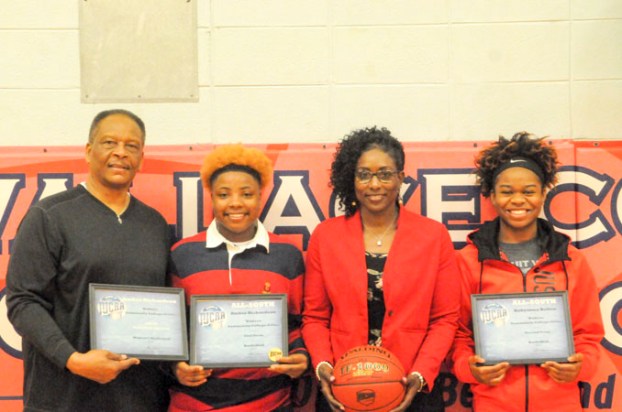 Richardson, who grabbed a ACCC-leading 13.6 rebounds a game, said she appreciates the recognition.  The Linden native also averaged a team-leading 14.3 points a game and majors in Mortuary.

“It means a lot because most people doubted the team,” Richardson said. “I’m thankful for my teammates. This wasn’t my goal. I wanted to come out this season and make myself known.”

Bolton, who played at Thompson High School, said the honor is a reflection of the Lady Patriots’ squad. She averaged 14 points a game.

“The award is special and makes me feel really good about the season,” Bolton said. “I’m proud to get the honor. I didn’t expect it. I did whatever I could to help the team win games.”

WCCS coach Herman Turner said he’s ecsactic to what Bolton and Richardson did for first-year players.

“We’re proud for them being freshmen accomplishing so much,” Turner said. “We hope they can continue to develop into outstanding student-athletes. Amber is always chasing perfection, she strives to be the best.”

Richardson and Bolton both said their goal is to play Division I basketball after they finish at WCCS next year.

Dallas County will have strong representation in the Alabama All-Star basketball game this summer on July 17 at Alabama State... read more