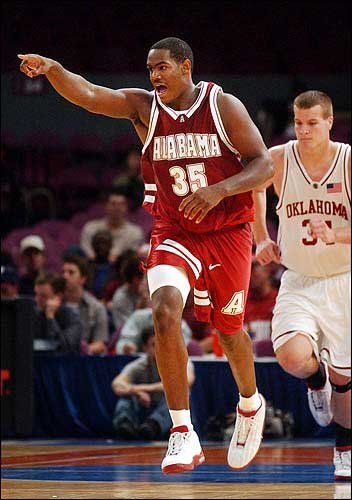 Uniontown's Erwin Dudley will be honored as Alabama’s legend during the SEC Basketball Tournament on Thursday. /Associated Press

The timing was perfect for former Alabama basketball star Erwin Dudley to retire from professional basketball.

The Uniontown native will be honored as Alabama’s legend during the SEC Basketball Tournament.  Dudley will receive his honor during halftime of the Crimson Tide’s tournament contest against Ole Miss on Thursday at 6 p.m. in Nashville.

“It caught me by surprise, I had no clue,” Dudley said. “It’s pretty special for me. I’ve got a lot of great memories playing at Alabama. Words can’t express how grateful I am to be named a SEC Legend.”

“The first memory was playing on the 2001 team that got snubbed from the NCAA Tournament because the committee said we didn’t play a tough schedule,” Dudley said. “We were motivated and went all the way to the NIT Finals. The next year, we won the SEC regular-season title and I was named SEC player of the year. We made the NCAA Tournament.”

The 6-foot-9 Dudley finished his Alabama career as a three-time rebounding champion. As a junior, he averaged 15 points and nine rebounds a game.

Family has always been a priority for Dudley. His daughter, Faith, 17, will graduate from Hillcrest-Tuscaloosa in May and will attend Alabama in the fall. Dudley and his wife, Tamara, have two other children.

“My daughter has been talking to me about retiring for five years,” Dudley said. “She wanted me home. When I played last year overseas, I kept that thought in the back of my mind. I kept my promise to her. I don’t regret it. I escorted her in the Debutante ball. It was a special moment for me.”

Dudley had NBA aspirations, but an injury at the Portsmouth Invitational Tournament in 2003 derailed those hopes. Dudley, who has a degree in Criminal Justice, spent over 12 years playing professionally in both Israel and Turkey.

“The NBA’s the ultimate goal for any basketball player who plays in the U.S.,” Dudley said. “The opportunity didn’t come for me. I went overseas my first year and I didn’t know what to expect. Basketball never changes, it’s all the same.”